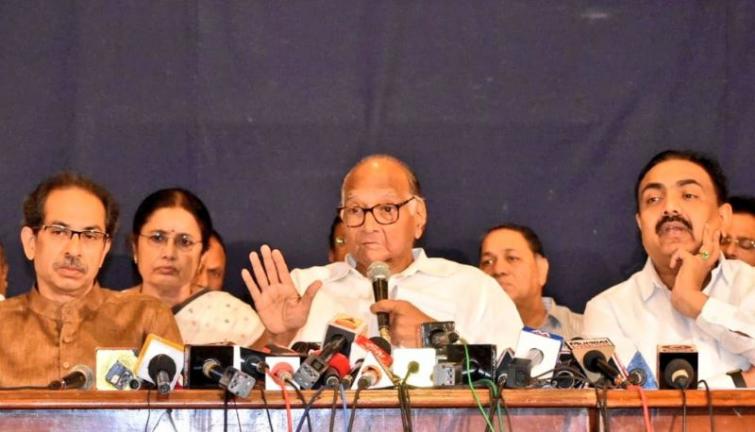 Mumbai/IBNS: Ahead of the floor test in the Maharashtra assembly on Wednesday, the Shiv Sena, Nationalist Congress Party (NCP) and Congress MLAs will be meeting at 5 pm on Tuesday to elect the leader of the alliance which has been termed as Maha Vikas Agadi.

The Supreme Court on Tuesday directed a floor test in the assembly by 5 pm on Wednesday while passing the judgement on a plea filed by the Shiv Sena, NCP and Congress against the government formation by Bharatiya Janata Party (BJP)'s Devendra Fadnavis.

A three-Judge bench headed by Justice NV Ramana directed that the floor test should be telecast live and the voting in the assembly should be undertaken through 'open ballot'.

In a show of strength, the Shiv Sena, NCP and Congress paraded all its 162 MLAs at a hotel on Monday evening and asked them to take a pledge that they will not crossover and be with the alliance.

On last Saturday, NCP chief Sharad Pawar's nephew and party leader Ajit Pawar along with few other MLAs extended support to the BJP which formed the government under Chief Minister Devendra Fadnavis.

The BJP has also called its 105 MLAs for a meeting at 9 pm on Tuesday.