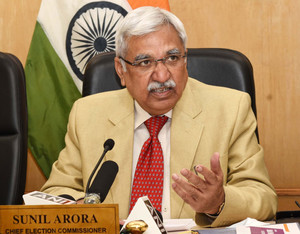 UP: Notification for bypolls to one RS seat issued

Lucknow/UNI: Election Commission on Monday issued notification to hold the by-election to one vacant seat of the Rajya Sabha in Uttar Pradesh on December 12.

Samajwadi Party Rajya Sabha member Tanzim Fatima, wife of Rampur Lok Sabha member Mohammad Azam Khan, had resigned from the Upper house after she got elected from the Rampur Assembly seat in the just concluded bypolls.

If necessary, the election would be held on December 12 and the results declared the same day.

However, as the BJP has an absolute majority in the state Assembly, hence there is no such chance of any elections and the winner would be announced after the expiry of the last date of withdrawals on December 5.

But on the other hand no BJP leaders are interested for the seat as the term is just for a year.

The term of the seat is just around a year and will expire on November 25, 2020.