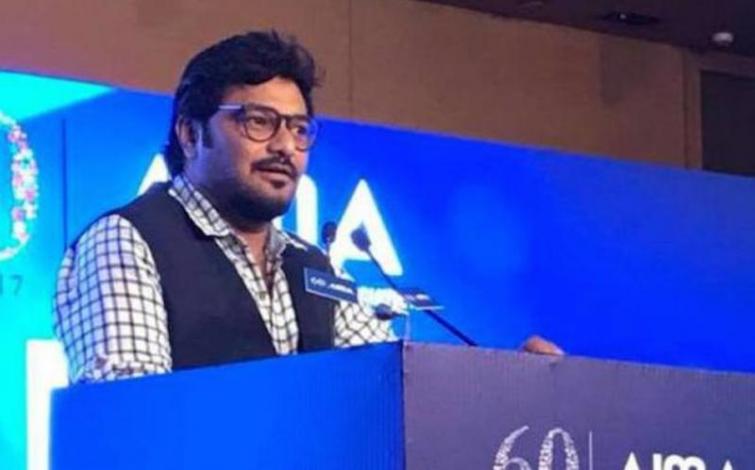 Namkhana/UNI/IBNS: Union Minister Babul Supriyo on Wednesday faced vehement protest and was even asked to go back by some people when he reached here in South 24 Parganas to take stock of the situation in the aftermath of cyclone 'Bulbul'.

Supriyo alleged that the agitators belonged to the ruling Trinamool Congress (TMC).

Soon after he reached Namkhana, one of the worst- affected areas, protesters stopped his convoy and showed him black flags.

The Union Minister was asked to go back by the protesters even as he tried to drive home the point that he was there to assess the ground-level situation.

Babul Supriyo yesterday said on the advise of Prime Minister Narendra Modi, he will visit Bulbul-hit Bakkhali and Namkhana in South 24 Parganas where the cyclonic storm on Friday and Saturday left a trail of destruction rendering thousands of people homeless as their houses were razed to the ground.

Babul Supriyo's visit is official as the state government was already apprised of the schedules where the union minster was supposed to interact with the affected people as well as the government officials regarding arrangements for proper evacuation and supply of essentials.

The minister said he will report to the union government of his study at the storm and rain affected district.

He said the visit was not political.

A separate report said a central team is expected here on Friday, which would visit the affected areas to study the ground situation there.

Both Prime Minister Narendra Modi and Union Home Minister Amit Shah had spoken to West Bengal Chief Minister Mamata Banerjee on Sunday last and assured of all central assistance to tide over the present situation.

In all 10 people had been killed and eight fishermen were still missing after their anchored trawlers capsized in the river.

Three task forces are being set up under the leadership of chief secretary for South 24 Parganas, North 24 Parganas and East Medinipur.