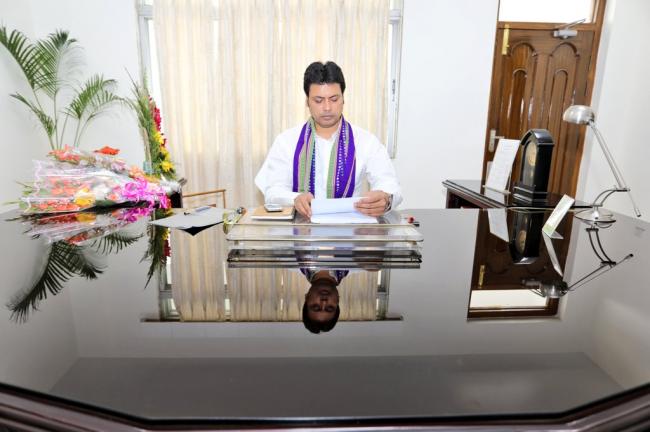 Agartala/UNI: An assistant professor of Pharmacology in Agartala Govt Medical College (AGMC) was put under suspension on Monday for making a comment regarding National Regster of Citizens(NRC) and Citizenship Amendment Bill (CAB) on Facebook.

Dr Chakraborty was one of the leading people in the medical fraternity in the state who had opposed the alleged misrule of the Left Front in Tripura and had reportedly played an important role before the last year’s assembly election in favour of BJP.

In August last year, a controversy had cropped up over the chief minister's birthplace following a statement of his mother.

A total of 37 edits were made on the Wikipedia page in three days last year, which saw his place of birth alternate between Tripura’s Gomati district and Chandpur in Bangladesh.

Referring to his deep roots in neighbouring Bangladesh, some Facebook users launched a scathing attack on Deb, saying, “Tripura CM Biplab Kumar Deb was born on November 25, 1971, in Kachua Upazilla, Chandpur of Bangladesh and that’s why he is opposing NRC in Tripura.”

“I’m a proud Indian citizen from Tripura and oppose Citizenship amendment bill as it would alter vulnerable demography in NE India & create unwanted tension between many communities. On this issue I am with Pradyot Manikya to protect the interest of legal citizens over illegal migrants,” he went on to tweet.

Dr Chakraborty earned the displeasure of the Chief Minister following his comment.

After Deb took charge of the health department, officials of the department started digging into Dr Chakraborty's social media records.

In a press conference, the chief minister, without naming anybody, commented, “I regularly observe who does what on social media. Doctor is appointed for treating patients not to write on NRC or CAB onFacebook.”

A few days later, on August 2 last, Dr Chakraborty was show caused by the Under Secretary to the government. The notice accused him of obliquely criticizing the chief minister by posting derogatory remarks on social media, which was unbecoming of a public servant. The notice also stated he had posted objectionable remarks on social media against CAB, which could create a rift among communities in the state.

Dr Chakraborty denied the charges in his reply on August 19.

Again on August 31 last, Director Medical Education served another ten days returnable notice along with snapshots of his posts, on the same charges.

Replying to the notice on September 11 last, he explained the referred posts were made on his personal capacity and not as a public servant and added that being a citizen of India he had the freedom to express his views on any issue.

Finally, today, Under Secretary to the government Anima Debbarma put him under suspension stated that his replies were not satisfactoryand reflected arrogance, as a result of which a disciplinary proceeding was being contemplated against Dr Chakraborty.

He was directed not to leave Agartala without obtaining permission from the competent authority.