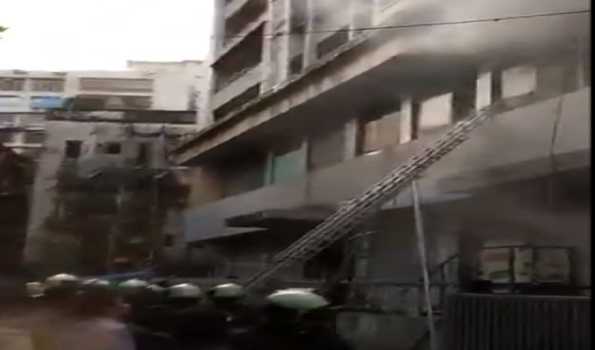 Mumbai: Major fire breaks out in the building, no casualtyÂ

Mumbai, Oct 15 (UNI) A massive fire broke out in a five-storey building at Grant Road in south-central Mumbai on Sunday.

According to the sources in the Fire Brigade, upon receiving a call from a resident of Aaditya Arcade building in the Padamsi area regarding a fire this morning, a team of fire-fighters rushed to the spot with a team of local police and ambulances.

The fire engulfed the ground floor and first floor of the building, however, no casualties have been reported in incident, officials said.

While eight to ten residents managed to come out of the building on their own, the officials said that approximately nine people were rescued by the firemen on the spot.

The fire was subsequently brought under control, they said, adding, the cause of the blaze has yet to be ascertained.