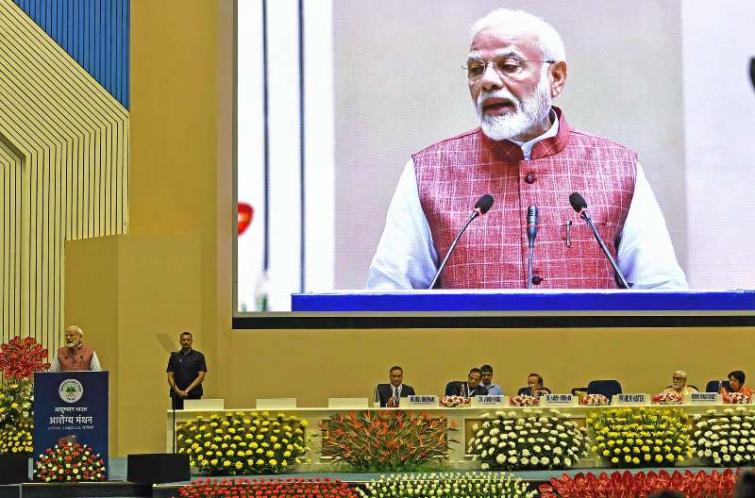 Had an excellent interaction with beneficiaries of Ayushman Bharat PM-JAY. I am delighted that this scheme has touched the lives of many across India, giving them better health and more happiness. @AyushmanNHA pic.twitter.com/92FH2cwrwl

He visited the exhibition on PM-JAY which showcased the journey of the scheme over the past one year.

The PM also launched the ‘Ayushman Bharat Start-Up Grand Challenge’ and released a commemorative stamp on the occasion.

Speaking on the occasion, Modi said “The first year of Ayushman Bharat has been about resolution, dedication and mutual learning. We are running the world's largest health care scheme successfully in India due to our determination.”

He said that access to medical facilities should be easily available to every poor and every citizen in the country.

He also said that there is a sense of dedication behind this success and this dedication belongs to every state and union territory of the country.

Modi added that it is a great achievement to awaken hope among the lakhs of poor people of the country to recover from the disease.

The PM said that in the last one year, if any one person's land, house, jewellery or any other items are saved from mortgage or sale for medical treatment, then this is a huge success of Ayushman India.

The Prime Minister said in the last one year about 50,000 poor could avail the benefit under PMJAY outside their district and state where they could get better facilities.

PM  Modi said that Ayushman Bharat is one of the revolutionary steps of New India and not just because it is playing an important role in saving the life of an ordinary person, but it is also a symbol of the dedication and strength of 130 crore people of the country.

He added that Ayushman Bharat is a collective solution for the whole of India as well as a holistic solution for a healthy India.

He also said that this is an extension of the government's thinking under which we are working in totality instead of thinking in pieces to deal with India's problems and challenges.

Arogya Manthan is a two-day event organized by the National Health Authority, to mark the completion of one year of Ayushman Bharat PM-JAY.

The purpose of the Arogya Manthan is to provide a platform to meet for all the important stakeholders of PM-JAY to meet and discuss the challenges faced in the implementation of the scheme in the past year and to forge new understanding and pathways to improving implementation.