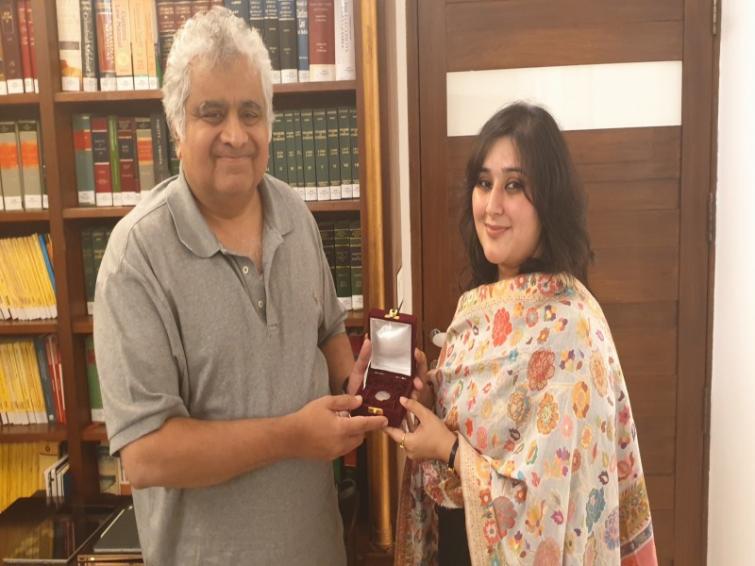 New Delhi: Former External Affairs Minister Sushma Swaraj’s daughter on Friday met senior lawyer Harish Salve and passed on his fees of Re1 for appearing at the International Court of Justice in the Kulbhushan Jadhav case.

Minutes before the former Union minister suffered a fatal cardiac arrest and was rushed to a hospital, she had a light-hearted chat with Harish Salve and asked him to "come and collect his fee of Re 1".

In an emotional tweet, her husband Swaraj Kaushal tweeted that their daughter Bansuri Swaraj met Salve on Friday and fulfilled her promise.

@sushmaswaraj Bansuri has fulfilled your last wish. She called on Mr.Harish Salve and presented the One Rupee coin that you left as fees for Kulbhushan Jadhav's case. pic.twitter.com/eyBtyWCSUD

“@sushmaswaraj Bansuri has fulfilled your last wish. She called on Mr.Harish Salve and presented the One Rupee coin that you left as fees for Kulbhushan Jadhav's case,”he wrote.

Sushma Swaraj passed away on Aug 6.

Recalling his conversation with the former Minister,  Harish Salve told NDTV: "She was sounding very cheerful and she was very happy. She was asking me why I haven't come and met her on this visit. I said I will come and meet her today. She said you have to come because I have to pay your fees. You commented somewhere that even that one rupee has not been paid so I have to give that one rupee for Jadhav's case."

"She was in a very cheerful mood and said I nowadays work in my daughter's office. I was to meet her today at 6 pm. I was so shocked, 10 minutes later she had a cardiac arrest," he stold the news channel.

In the last picture shared online, Swaraj had posted an image with the family members of Kulbhushan Jadhav.

Kulbhushan Jadhav's family came to see me today. I wish them all the best. pic.twitter.com/CaXYaDXAUH

She had tweeted: "Kulbhushan Jadhav's family came to see me today. I wish them all the best."