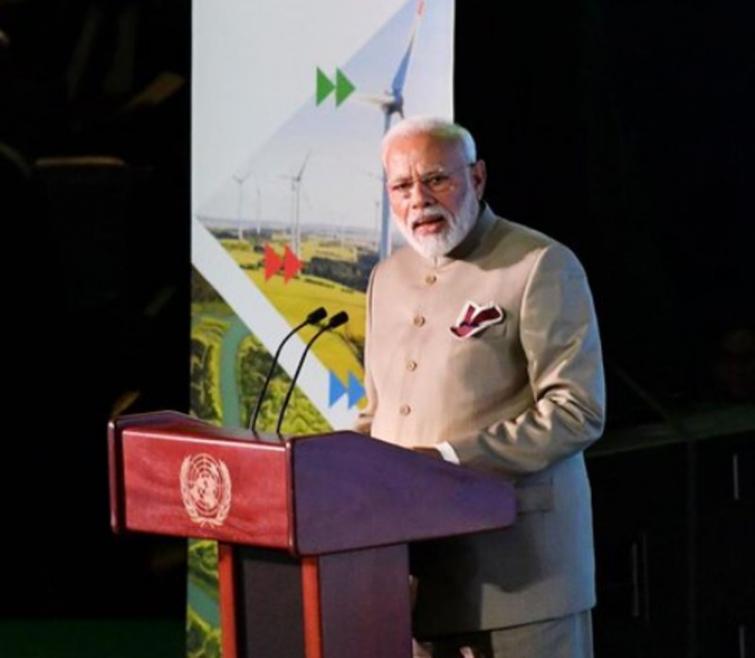 New York, Sept 23 (IBNS): Prime Minister Narendra Modi on Monday addressed the United Nations Climate Action Summit in New York where he raised concern over the climate crisis and said the world "is not doing enough" to tackle the same while calling for "global behavioural change."

PM Modi was among the first speakers at the UN Secretary-General convened Climate Action Summit.

He said India is not here to just raise the crisis issue but also provide a roadmap to tackle the same.

"We must accept that if we have to overcome such serious challenges, then what we are doing today is not enough. What we need is global behavioural change. India is here today not just to talk about this serious issue but to present a roadmap," he said.

The Prime Minister said India is making every effort to increase the share of non-fossil fuel energy.

Addressing a Summit on Climate Change at the @UN. https://t.co/PswS5nEv1Y

As part of its commitment to the 2015 Paris Climate agreement, India had set the 175 GW target for increasing the share of non-fossil fuels.

Modi said the time to talk related to this is over.

"The world needs to act now," PM Modi said at the gathering iwhich is also attended by US President Donald Trump.

Speaking about India's initiative, Modi said: "India is launching a coalition for disaster resilient infrastructure. I invite all world leaders for this coalition."

PM @narendramodi speaks at #ClimateActionSummit at #UNGA. PM set out India’s bold plan to ensure all its citizens gain access to energy while preserving the planet. Full remarks athttps://t.co/XBNTzgc4xX pic.twitter.com/8Kt7IdqefV

PM Modi arrived in New York on the second leg of his week-long US visit after a highly successful rally at Houston wherein US President Donald Trump also joined him in addressing the Indian diaspora.

Among other programmes in New York, Prime Minister will have bilateral engagement with US President Donald Trump on Tuesday and he will also address the UN General Assembly on Sept 27.