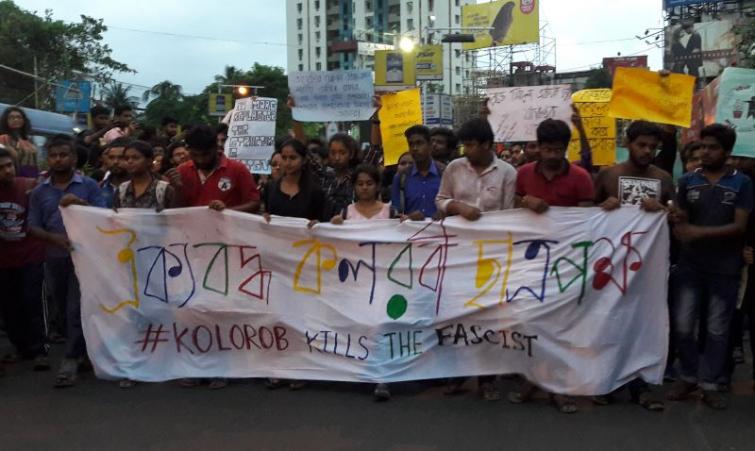 Kolkata: The Left wing students of iconic Jadavpur University (JU) here on Monday held a massive protest rally against the episode involving Union Minister and Bharatiya Janata Party (BJP) leader Babul Supriyo, in a more of a fight for the Left's survival and relevance in the educational institution.

The protest, which began at JU's Gate No. 4 at around 4:30 pm, was over Supriyo's visit to the campus which led to a major scuffle between the BJP and the Left students on last Thursday.

Though Supriyo was seen assaulted by some students, the blame game continued as the protesters held the Union Minister responsible for the entire unsavoury incident.

As the protest rally on a hot Monday evening stepped outside the university through Gate No. 2 and proceeded towards busy Sulekha More, slogans demanding elimination of the BJP from West Bengal were heard.

One protester even said, "What BJP does is not our culture. What we are doing today is our culture," referring to the songs in the lips of a huge of crowd of young students.

At a time the Communism is waning across the nation, the protest rally, organised by all Left-affiliated students' union, can also be interpreted as a fight for the Left's survival particularly looking at the placards which reads, "It is the fight for the existence" and "ABVP nahi chalega (there will be no ABVP)".

Akhil Bharatiya Vidyarthi Parishad (ABVP), which is now emerging as a player in the student politics turf war in West Bengal with the rise of the saffron forces, is the student wing affiliated to the BJP and its ideological patron RSS.

What was the incident?

Union Minister Babul Supriyo faced massive protest by the students of Jadavpur University on Thursday after being heckled  for entering the campus supposedly with an armed force to attend a programme by the ABVP.

Not only was he heckled but he was also gheraoed by members of two Left-leaning organizations - Arts Faculty Students' Union (AFSU) and Students Federation of India - (SFI).

In retaliation to the demonstration by SFI, ABVP students went on a rampage and damaged several university properties, including a union’s office.

A large contingent of police force rushed to the spot even as the agitators refused to budge on their decision.

Fashion designer-turned-politician Agnimitra Paul on Friday lodged an complaint where she alleged physical abuse and molestation by the students.

In her complaint, she said, "I was subjected to physical abuse, molestation, outraging my modesty. My clothes were torn off and some of the assaulting crowd were even instigating others for further assault on me."

Paul, who is associated with the BJP now, said she was unable to register the FIR immediately as she was feeling unwell.