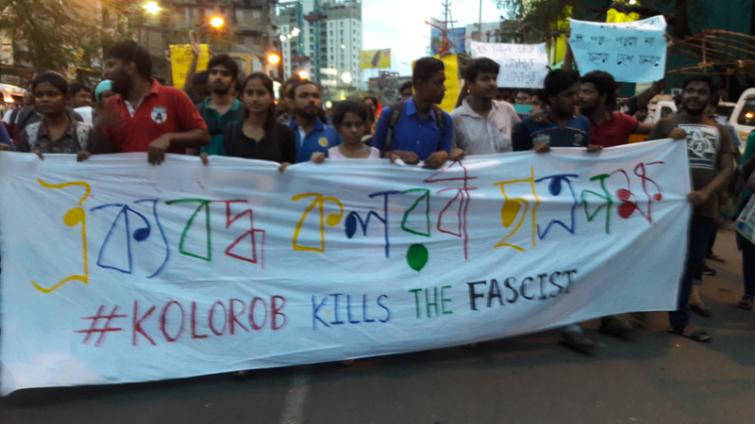 Kolkata:  Left affiliated students participated in a rally in Jadavpur area of south Kolkata on Monday to protest against the recent incidents which happened in the iconic Jadavpur University campus over the visit of Union Minister Babul Supriyo on Thursday.

The incident in which Supriyo and others were allegedly assaulted triggered a blame game as the turf war between Left affiliated student union and the AVBP affiliated to saffron rage.

The protest started from gate number 4 of the university at around 4.30 pm.

Supriyo, who belongs to the BJP, faced massive protest by the students of Jadavpur University on Thursday after being heckled earlier in the day for entering the campus supposedly with an armed force to attend a programme by the Akhil Bharatiya Vidyarthi Parishad (ABVP), the student wing affiliated to the saffron.

A large contingent of police force rushed to the spot even as the agitators refused to budge on their decision.

Fashion designer-turned-politician Agnimitra Paul on Friday lodged an FIR where she alleged physical abuse and molestation by the students.

In her FIR, she said, "I was subjected to physical abuse, molestation, outraging my modesty. My clothes were torn off and some of the assaulting crowd were even instigating others for further assault on me."

Paul, who is associated with the Bharatiya Janata Party (BJP) now, said she was unable to register the FIR immediately as she was feeling unwell.