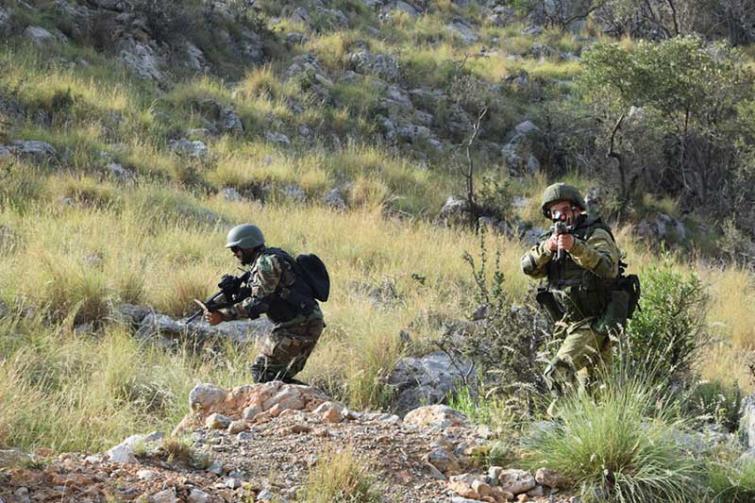 Srinagar: Around 450 to 500 terrorists are present at terror launch pads in Pakistan and are waiting to infiltrate into India, media reports said on Monday.

Close to 500 terrorists are stranded at terror launch pads in Pakistan - double than that in the last three years -- waiting to infiltrate into India, and the military is ready to response "at any level, any range, anywhere", sources told NDTV.

Chief of Army Staff General Bipin Rawat earlier in the day said Pakistan has very recently 'reactivated' its terror camp in Balakot, where the Indian Armed forces launched a surgical strike in the wake of terror attack at a CRPF camp in Pulwama in February.

Talking to reporters at India's premier defence training establishment, the Officers Training Academy (OTA) here, Gen Rawat, sounding a warning to its neighbour, said India's response might be even beyond its response to Balakot.

Stating that about 500 infiltrators were waiting to infiltrate into India from across the border, he said the numbers has been varying from time to time and they keep shifting their entry points due to climatic conditions.

'The terror camp in Balakot, which was damaged and destroyed during the surgical strikes, has been reactivated by Pakistan very recently. Pakistan has got people back there', he added.

Gen Rawat said the Army has pushed in more troops along the Line of Control (LoC).

Asserting that the Indian Army was prepared to the challenge, he strongly indicated that India’s response might be similar to that of Balakot or “even beyond”.

"Pakistan violates ceasefire to push terrorists into our territory. We know how to deal with the ceasefire violations. Our troops know how to position themselves and take action. We are alert and will ensure that maximum infiltration bids are foiled."

Asked whether there would be a repeat of India’s reaction like in Balakot, he shot back “Why repeat? Why not beyond that? Let them keep guessing.”

On the present situation in Kashmir, he said there was no clampdown in the Kashmir Valley and that the terrorists were using it as a facade to create fear among the people.

'Normal activities are on and the restrictions will be eased up gradually', Gen Rawat said and added that communication lines between terrorists and their handlers have been snapped, while there was ample connectivity among the local people.

The communication clampdown was happening between terrorist handlers and terrorists in the Valley, he said.

“But otherwise communication is happening between people to people and families also can talk to their own. Defence has made facilities for it',he said.

He said "if you look at the ground situation, the killings and violence has come down.

Terrorists were kept at bay. We will gradually start easing the restrictions on the people.'

He, however, reiterated that there was no clamp down on people.

'Let me tell you one thing, there is no clampdown on people,' he said, adding, trade and business were functioning in full swing in the valley, though local shopkeepers were yet to open their shutters.

Pointing out that the brickkilns near Srinagar were functioning and people were working in it, Gen Rawat said people were collecting sand on boats from the Jhelum river.

'Apples are being collected in heaps from the orchards, packed in boxes and loaded on hundreds of trucks, which are moving out. Planes are flying in and out of the airport, which means that taxis are also plying enabling the people to reach the airport', he said.

He said the terrorists were using the clampdown as a facade to create fear among the people," he added.

Noting that terrorists were misinterpreting the meaning of Islam in an attempt to perpetuate and justify violence, Gen Rawat said "I feel the interpretation of Islam by some elements who possibly want to create disruption is being fed to large number of people.'

'I think we should also have preachers who convey the correct meaning of Islam," he observed.

The camp was bombed by India in February in response to a suicide attack at Jammu and Kashmir's Pulwama that had left 40 Indian paramilitary forces killed.