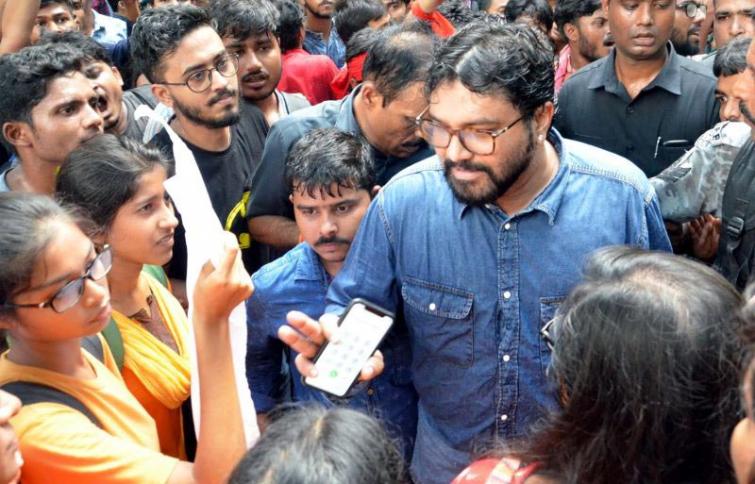 Kolkata, Sep 21 (UNI) Union Minister Babul Supriyo today threatened to file a defamation suit against CPI(M) leader Md Salim for the latter's "filthy" remark on him during his visit in the Jadavpur University campus on Thursday where a section of Leftist students gheraoed the minister for over five hours before the state Governor Jagdeep Dhankar rescued him in his car and got him into Raj Bhawan.

The Union Minister for Environment and Climate Change also assured the mother of a JU student that he would not file any FIR naming her son, who was shown in the TV clipping pulling Babul Supriyo's hair when the minister was assaulted.

" I will file a defamation case against this loser (Md) Salim who people threw out from the constituency. He has to prove his charge or pay the price. I need not defend myself against filthy losers like him. it’s nauseating and below my dignity. My lawyers will deal with him (Md Salim)," Babul Supriyo today threatened on his Twitter account.

The Union Minister threat happened in response to a twitter of CPI(M) leader where he said "Babul Supriyo asks girls why they’re wearing 'skimpy' clothes and what they come to university for. He went on to tell a girl to join him in his room and he will show her who he really was," Md Salim, who lost his MP seat in the 2019 poll, said "How come all such people are found only in BJP?"

Babul Supriyo has also declared on Facebook that he will not be filing an FIR against the student,

who was caught on camera assaulting him.

Babul Supriyo's gesture came after the student mother with her folded hand in a video shot, which went viral, appealed to the minister not to retaliate against her son because they are from poor family and the cost of education of the student is borne in very tough condition.

The mother, a resident of Burdwan, of the student is also cancer afflicted and having camo theraphy for past three years.

The minister assured the mother to remain calm and take care of her and get well soon.