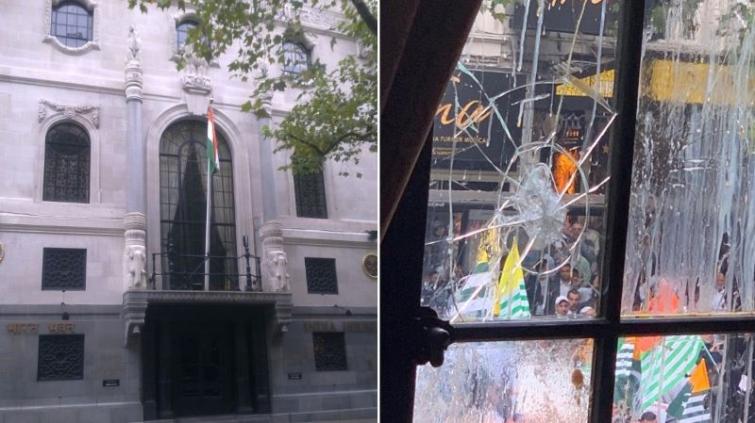 London: In an ugly protest against New Delhi's move to abrogate Article 370, the Indian High Commission in London was attacked and vandalised on Tuesday.

The window panes of the embassy were vandalised by the protesters who were reportedly carrying Pakistan-occupied Kashmir (PoK) flags and raising freedom slogans.

He tweeted, "I utterly condemn this unacceptable behaviour and have raised this incident with @metpoliceuk to take action."

I utterly condemn this unacceptable behaviour and have raised this incident with @metpoliceuk to take action.

Not the first attack

This is the second such incident where the High Commission has been attacked.

Earlier during India's Independence Day celebrations on August 15 this year, stones and eggs were thrown targeting the High Commission's building.

Prime Minister Narendra Modi last month speaking to new British Prime Minister Boris Johnson drew attention to the violent Pakistani and Khalistani mob attack at the Indian High Commission on the Independence Day in the wake of the Kashmir move by India.

India's External Affairs Ministry in a press statement said PM Modi raised the issue of "the challenges posed by vested interests pursuing their motivated agenda, including by violent means."

"In this context, he referred to the violence and vandalism perpetrated by a large mob against the High Commission of India in London on the last Independence Day of India. Prime Minister Johnson regretted the incident and assured that all necessary steps would be taken to ensure safety and security of the High Commission, its personnel and visitors," the MEA said.

The protests started after the ruling Hindu nationalist Bharatiya Janata Party (BJP) government in India scrapped Articles 370 and 35A to do away with Jammu and Kashmir's special status.

Though several Islamic nations acknowledged it as an internal matter of India, Pakistan, which has been sponsoring terrorism in Kashmir, criticised and took the whole case in the international arena. But so far it has failed to garner any support.