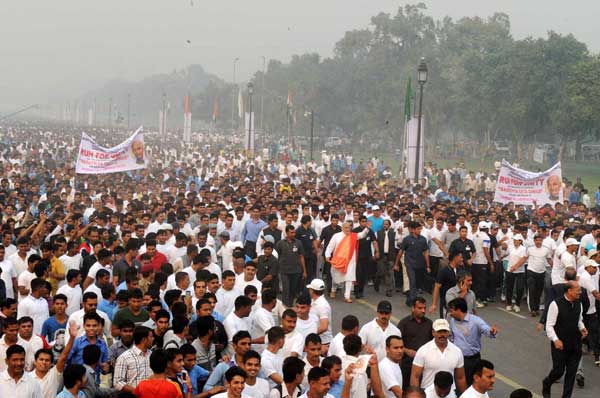 He was addressing a large gathering of youth and people from all walks of life, at Rajpath in New Delhi.

The Prime Minister referred to Sardar Patel Jayanti as an inspirational moment, and said a country that forgets history, cannot create history.

He said India`s glorious heritage will always be an inspiration for its aspirational youth.

He reminded the people that India`s rich heritage can never be divided on ideological lines. He remembered former Prime Minister Indira Gandhi, noting that today was her death anniversary.

Speaking at the event, Modi said, "Through his skill, vision and Rashtra Bhakti Sardar Patel integrated the nation. We can never forget his contribution."

Mentioning Sardar Patel`s unique contribution to the freedom struggle, Prime Minister drew a comparison of the Sardar`s relationship with Mahatma Gandhi, to the relationship between Swami Vivekananda and Ramakrishna Paramahansa.

"Without Sardar Patel, even Mahatma Gandhi seems incomplete. It was a unique partnership that strengthened the struggle for independence," the Prime Minister said after he placed flowers on a statue of Sardar Vallabhbhai Patel in Delhi near parliament.

Prime Minister also spoke of Chanakya`s vision of a united India, and said the Sardar had, through his strategic foresight, converted that dream into reality.

On India`s unity in diversity, Prime Minister said this diversity gives us strength.

He said India`s people should always be vigilant to guard this unique strength of unity in diversity.

He regretted that thirty years ago, India`s fabric of unity in diversity had been attacked, as one specific community had been targeted.

"Our culture and legacy is of Unity in Diversity. Let us rise over differences of creed, community, language," he said.

Even as he exhorted people to begin the run, the assembled youth enthusiastically waited for the Prime Minister to lead the run.

With thousands of participants taking part in the marathon, Modi was seen briskly walked down Rajpath along with other participants.

Modi earlier tweeted: "Sardar Patel's life is a journey of deep-rooted courage, dedication & service to the Motherland. He is truly the architect of Modern India."

President Pranab Mukherjee also flagged off the 'Run for Unity' from the Rashtrapati Bhavan here.