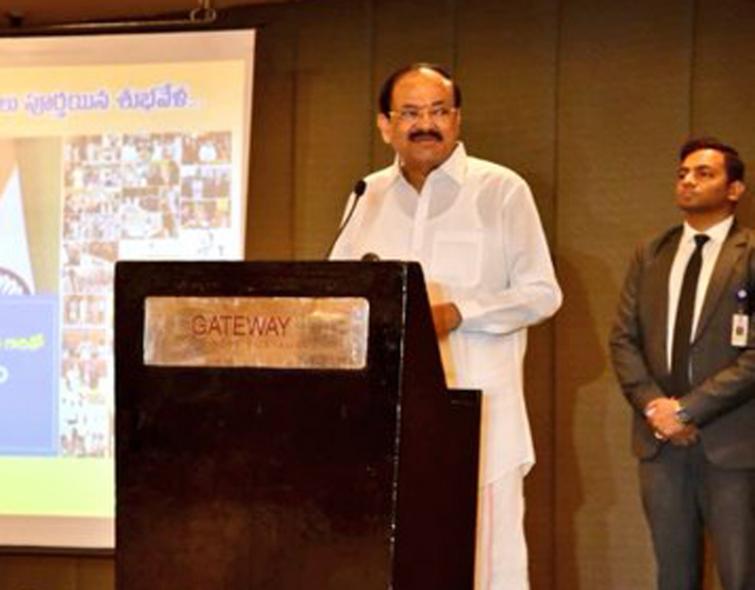 Calling it a feather in the glory of Indian Railways, the Vice President said that the 6.7- km long tunnel provides viable rail connectivity between Krishnapatnam Port and its hinterland for goods train services and facilitates seamless freight transport.

Describing the structure as an engineering marvel, Naidu lauded Indian Railways for completing the longest electrified tunnel in a record time. Built at an estimated cost Of Rs 437 Cr, the tunnel has 44 Trolley Refuges and 14 Cross Passages.

Saying that he was overwhelmed with happiness after traveling in the newly commissioned Obulavaripalli-Krishnapatnam line, the Vice President turned emotional to have witnessed his long-cherished childhood dream come to fruition.

“I am emotional because it passes through my native and ancestral villages where I had spent my childhood. At that time nobody had even imagined that a train would be passing through these hillocks one day. When I was minister this line was envisaged, planned, surveyed and sanctioned. It is finally completed when I am the vice president now,” he added.

The Vice President was accompanied by his spouse Usha Naidu.

Naidu recalled that in view of the importance of Krishnapatnam port-Obulavaripalle line for the development of the region, he had mooted the idea when Nitish Kumar was the Railways Minister in Atal Bihari Vajpayee’s cabinet.

He said that he had been pursuing it since then.

"When I was a Minister in Atal Bihari Vajpayee’s Cabinet this line was envisaged," he added.

This newly commissioned line of 112 km reduces the travel time to five hours as compared to the 10 hrs earlier for a goods train from Krishnapatnam Port to Obulavaripalli. It also reduces the distance by 72 kms for the trains coming from Guntakal Division to Krishnapatnam and reduces traffic density in Obulavaripalle - Renigunta - Gudur section.

It will facilitate operating freight trains on Obulavaripalli-Venkatachalam-Krishnapatnam Port while providing the shortest path between Chennai-Howrah and Chennai-Mumbai rail routes.

The new line will ease congestion of both passenger, and freight carrying trains in Vijayawada - Gudur - Renigunta - Guntakal sections. Significant growth in freight traffic is expected and it helps these hinterland areas in socio-economic growth.

The Vice President said that the launch of passenger services between Venkatachalam and Rapur would fulfill the long-cherished wish of the people.

Naidu complimented the Railway Minister, Piyush Goyal and the Railway Board for accepting his suggestion to start the passenger services between Venkatachalam and Rapuru.

The Minister of State for Railways, Suresh Angadi, Usha Naidu and other senior Officials of Railway were present on the occasion.