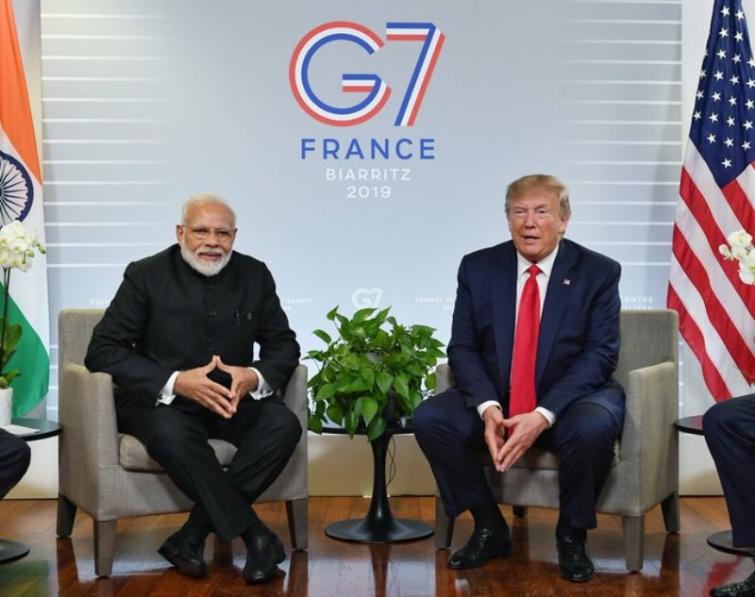 Kashmir a bilateral issue: Modi to Trump; US president agrees as India pips Pakistan in diplomacy

Biarritz, Aug 26 (IBNS): "We spoke last night about Kashmir, Prime Minister [Modi] really feels he has it under control. They speak with Pakistan and I'm sure that they will be able to do something that will be very good."

Nothing better sums up the Narendra Modi-led Indian diplomatic victory over Pakistan trying to internationalise the Kashmir issue since India abrogated Artice 370 than the above statement by US President Donald Trump on the sidelines of G-7 summit.

US President Donald Trump has often offered to work as a mediator between the two nations to solve the Kashmir issue following Pakistan PM Imran Khan's visit to USA.

On Monday, Prime Minister Narendra Modi and US President Donald Trump were before the media and Trump said that the Kashmir issue had been discussed between the two leaders. He agreed that the issues between India and Pakistan are 'bilateral in nature' and as Modi said, both nations could sort them out.

"The issues of India and Pakistan are bilateral. I believe together we can sort out our issues," Modi told media with Trump sitting by his side with his body language all through clearly indicating that India got an upper hand in Kashmir diplomacy.

Highlighting that Kashmir issue was discussed between them, Trump said, "US is a good friend with both India and Pakistan."

Trump, whose offer to mediate earlier had rattled India, said the PM has informed him that the situation in Kashmir is under control.

Modi rejected any scope for a third party mediation on Kashmir saying "we don't want to trouble any third country."

"Prime Minister really feels he has it under control. They speak with Pakistan and I'm sure that they will be able to do something," Trump said.

Modi said during his meeting with Trump the issue of enhancing trade between the two countries was discussed.

"Both India and US work on democratic values," Modi said.

"India and America regularly hold talks on business and economic sector. On many issues, we welcome suggestions of America," Modi said.

Both the leaders are currently visiting France to attend the G7 Summit.