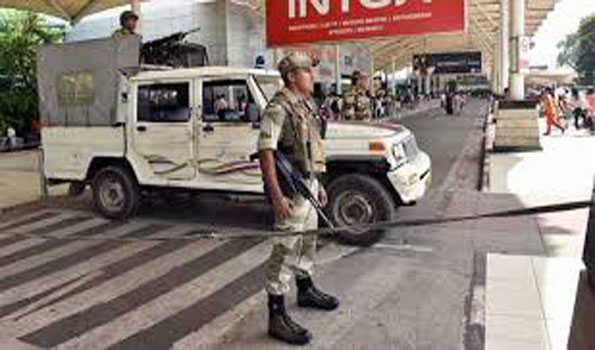 Mumbai, Aug 23 (UNI) The CISF and Mumbai Police will further beef up the airport's security after Thursday’s mega-security breach when a ‘mentally ill’ person jumped over a wall to take a stroll beneath a Spicejet aircraft, official sources said here on Friday.

The incident has come as a huge embarrassment to the concerned agencies - happening exactly two weeks after the Centre’s stringent directives on security matters in the wake of the scrapping of Article 370 - with many to remain in force till Aug 31.

It may be recalled that on Thursday afternoon, as the Spicejet flight SG-634 Boeing 737 aircraft waited on the taxiway N1 to enter the runway for take off to Bengaluru, passengers and crew of the aircraft and others were shocked to see an unauthorized person moving around on the ground below.

He had scaled the perimeter walls of the Mumbai Airport which has slums on North and eastern sides, jumped down, strolled nonchalantly around 50-metres to the taxiway, gaped at the engine, touched the huge wheels and went around the undercarriage of the aircraft.

The man even expressed triumph over his feet by raising both his arms even as an airport jeep reached the place to keep an eye on him. But the security personnel did not step out of the vehicle to avoid getting too close to the aircraft engine.

Unhinderned, the intruder then walked to the tail-end and came out where he was caught by the security team, barely minutes after he came on his adventure, even as his sojourn was recorded in CCTVs and some passenger mobile phones.

A thorough search on him revealed nothing including any identification, but he claimed to have entered the restricted security zone “only to see the airplane” at close quarters.

He was later identified as a ‘mentally ill’, 24-year old main from Sion, who recently even clambered atop a stationery BEST bus in his locality.

The family explained to the police that he indulged in such antics when he doesn’t take his medicines on time. He is suspected to have entered the airport by climbing on the mobile toilets lining the airport wall.