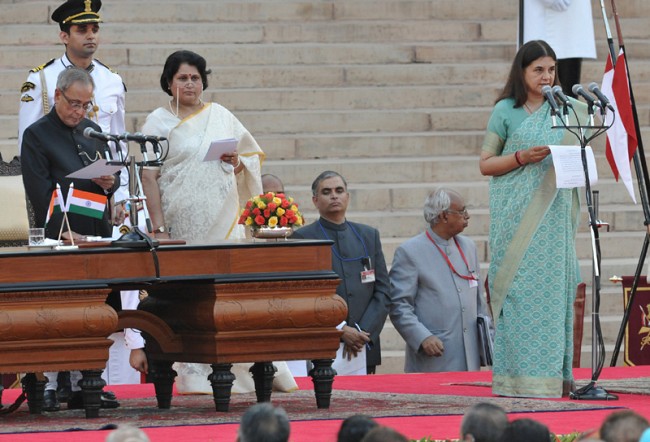 India Blooms News Service | | 30 Oct 2014, 04:02 pm
#Maneka Gandhi, # Beti Bachao Beti Padhao
New Delhi, Oct 30 (IBNS): To initiate the roll out of the Beti Bachao Beti Padhao (BBBP) scheme of Government of India, the first round of regional consultations will be held at Chandigarh on Friday under the leadership of Union Minister of Women and Child Development Maneka Gandhi.

27 District Collectors/Deputy Commissioners from the Northern States of Punjab, Haryana, Himachal Pradesh, Uttarakhand and Chandigarh UT will take part in the programme.

The inaugural address at the consultation shall be delivered by Maneka Gandhi.

The primary agenda of this consultation is to deliberate on the implementation modalities of District Action Plans under this Scheme.

In addition to the DCs and state government officials, the consultation shall be attended by officials from MWCD, MH&FW, MHRD and PMO.

Briefing on the BBBP initiative and the scheme guidelines developed for the District Collectors/Deputy Commissioners shall be done during the consultation.

An overview of the implementation of PC & PNDT Act in the country shall also follow.

The critical components of BBBP, namely media campaign and multi-sectoral action in selected districts with adverse CSRs, the scheme guidelines and various other matters shall also be discussed in the consultation.

The BBBP initiative lays focus on strict enforcement of PC & PNDT Act by MoHFW, ensuring girl child friendly standards in schools including strengthening of school management committees (SMCs), creation of forums like Balika Manch to encourage participation of girls, re-enrollment of drop-out girls in secondary schools, ensuring availability of functional toilets by MoHRD (School Education) and capacity-building and sensitization of concerned government officials, grassroots functionaries, elected representatives, promote early registration of pregnancy by motivation & incentivizing mothers to register their pregnancy in the first trimester among others.

The formal launch of the scheme is scheduled at a later date. Prime Minister Narendra Modi has been requested to launch the scheme.

The trend of decline in the child sex ratio (CSR) defined as per of girls per thousand of boys between 0-6 years of age has been alarming.

To address this grave issue the Government of India has announced the Beti Bachao Beti Padhao (BBBP)Scheme.