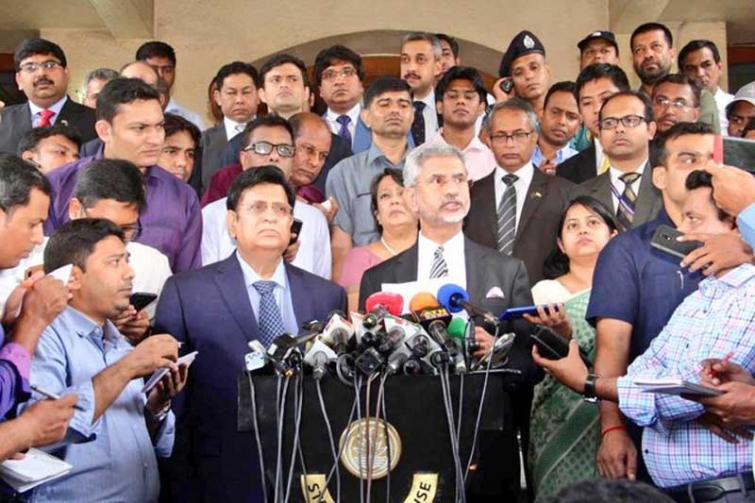 Dhaka, Aug 20 (UNI) India's External Affairs Minister S Jaishankar, who is currently on a three-day visit to Bangladesh, on Tuesday said that the neighbouring nation and India agreed on safe, speedy and sustainable return of Rohingyas to their place of origin in Myanmar's Rakhine State.

He made the remarks while briefing reporters after a bilateral meeting with his Bangladesh counterpart Dr AK Abdul Momen at state guest house Jamuna in the morning.

Asked about the Teesta water-sharing deal, Jaishankar said, we have a position and we have a commitment on that position, so there is no change. He also described the Bangladesh-India relations as a model for South Asia.

The Indian External Affairs Minister termed National Register of Citizens (NRC) for Assam India’s internal issue. The meeting began at 2310 hrs and lasted for over one hour.

The purpose of NRC update is to identify Indian citizens from amongst all the residents of Assam, thereby leading to identification of illegal migrants residing in Assam, who entered Indian territories after the midnight of 24th March 1971 and to determine the citizenship of the applicants.

Jaishankar who arrived here on Monday night on a three-day official visit to Bangladesh said the two countries have many things to discuss.

"We’ve a very good relationship and strong relationship, We’ve many things to discuss about taking the relationship to a higher level", he said while talking to mediapersons after his arrival at Hazrat Shahjalal International Airport.

Before the meeting, the Indian minister visited Bangabandhu Memorial Museum at Dhanmondi-32 and paid tributes to Father of the Nation Bangabandhu Sheikh Mujibur Rahman by placing wreaths at his portrait there. Dr Momen is set to host a lunch in honour of his Indian counterpart after the meeting.

The Indian Foreign Minister is scheduled to meet Prime Minister Sheikh Hasina at her official residence around 1700 hrs on Tuesday.

Indian High Commissioner in Dhaka Riva Ganguly Das will host private dinner for Jaishankar on Tuesday evening. He will leave Dhaka for Kathmandu on Wednesday morning.

India is a leading development partner of Bangladesh, as it has extended concessional lines of credit to the tune of around eight billion US dollars.