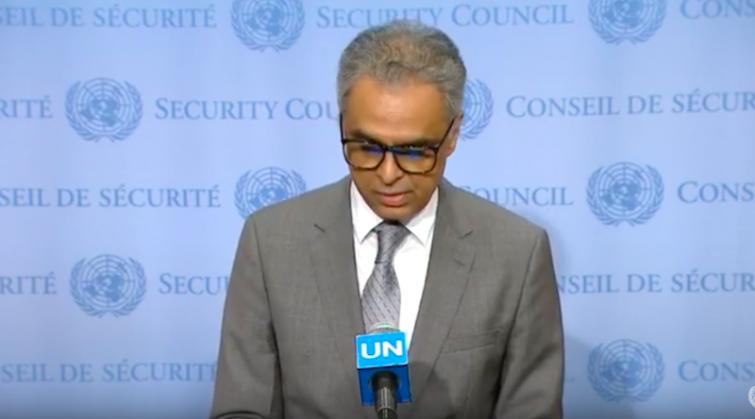 New Delhi, Aug 17 (IBNS): India's Ambassador and Permanent Representative to the United Nations, Syed Akbaruddin, has won the hearts of at least Twitter users, if not Pakistan, for his skills of diplomacy while interacting with Pakistani media in New York a day ago.

During his interaction with media after the closed-door consultation of the UNSC on Kashmir, Akbaruddin took three Pakistani questions right at the start  with a warm disposition but with replies that were strong.

When one Pakistani reporter asked about when can talks resume between the two countries, he walked up to him and extended his hand to him. Not forgetting to mention India's stand on Kashmir talks that terror must stop first to sit across the table, Akbaruddin shook his hand with other Pakistani journalists too.

When at one point a Pakistani journalist said, "Article 370, fine, is India's internal matter", the envoy even sarcastically said, "Thank you for accepting that".

R.S. Bains said, "Dear Hyderabadis, if you have a kid called Akbaruddin at home, see to it that he becomes a Syed Akbaruddin and not that Akbaruddin Orangutan."

Anwesh Parida said, "Well done sir... #SyedAkbaruddin Really you are the pride of our country..."

Well done sir... #SyedAkbaruddin
Really you are the pride of our country... ðŸ‡®ðŸ‡³ pic.twitter.com/qjQQ0D8AMi

Sundaram Tiwari tweeted, " Each questions brilliantly tackled by @AkbaruddinIndia sir, with clear and stern message to Pakistan in #UNSC “STOP TERROR TO START TALK” When life give you AKBARUDDIN..make it SYYED ..not bigot OWAISI. #SyedAkbaruddin another gem of India."

Each questions brilliantly tackled by @AkbaruddinIndia sir, with clear and stern message to Pakistan in #UNSC
“STOP TERROR TO START TALK”
When life give you AKBARUDDIN..make it SYYED ..not bigot OWAISI.#SyedAkbaruddin another gem of India. pic.twitter.com/vhVWwx3ZAL

What was the crux of Akbaruddin's address?

India on Friday said there was an effort to masquerade national statements by two countries [read Pakistan and China] as the will of international community in respect to the removal of Article 370 in the Indian state of Jammu and Kashmir, but the national position of India remains that the move in Kashmir is an internal issue with no external ramifications.

Soon after the United Nations Security Council (UNSC) closed door meeting on Kashmir, Akbaruddin told a news conference at the UN, "Our national position was and remains that the matters related to Article 370 are entirely an internal matter of India. These have no external ramifications."

He said the recent decisions by the Indian government are to promote good governance.

"We are gratified that the Security Council in its closed consultations appreciated these efforts, acknowledged them and indicated that this is the direction in which they would like the international committee to move," he said.

He said national statements by countries are being masqueraded as the will of international community.