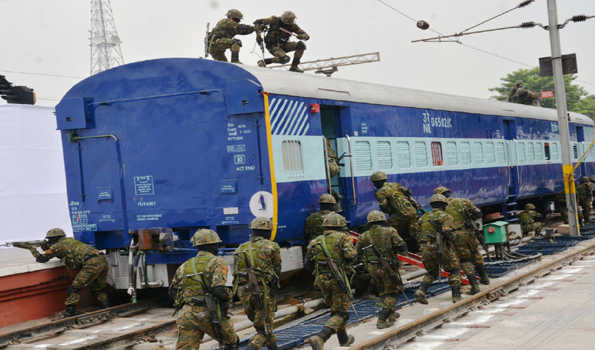 New Delhi, Aug 14 (UNI) Railway Minister Piyush Goyal on Wednesday launched a separate commando unit for Indian Railways called CORAS (Commandos for Railway Security) and announced that a training centre will be set up in Haryana to train and update the Railway Protection Force (RPF) paratroopers.

Citing 2008 Mumbai blasts, the Minister said that in the absence of a dedicated commando force during the terrorist attack at Chhatrapati Shivaji Maharaj Terminus (CST) railway station, RPF and Mumbai Police fought the terrorists with their ordinary rifles. "With CORAS at the forefront, I believe that Indian Railways will always stand ready," he added.

Aimed to provide fool-proof security to Indian Railways, trained commandos will be deployed in critical and sensitive areas of the country like Naxal-affected areas, Jammu and Kashmir and parts of North Eastern states like Tripura and Manipur.

Comprising the RPF and Railway Protection Special Force personnel, CORAS is headed by the Director General of the RPF and is armed with bullet-proof jackets, helmets and sophisticated weapons.

Goyal also called for stricter actions against touts and officials who do not heed to passengers' problems.

"With the installation of CCTV cameras, WIFI networks and artificial intelligence, we intend to make Indian Railways the safest and public-friendly railway network in the world," Goyal added.