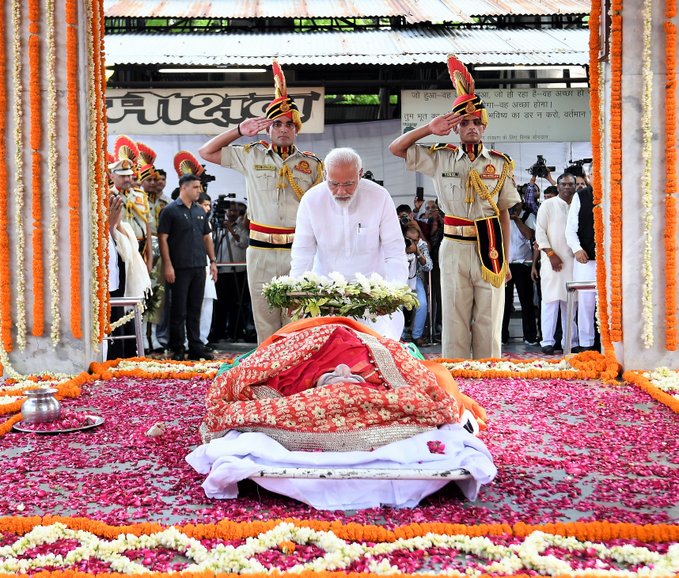 Wrapped in tri-colours, her last rites were performed with full state honours.

The last rites were performed in Delhi's Lodhi Crematorium.

Her body was kept at BJP headquarters from 12 noon to 3 pm for people to pay their last respects.

She was later taken to the crematorium.

Modi, who went to Swaraj's residence on Wednesday morning, was seen almost moving to tears while sharing solidarity with his former colleague's family.

Modi said, "I can’t forget the manner in which Sushma Ji worked tirelessly as EAM in the last 5 years. Even when her health was not good, she would do everything possible to do justice to her work and remain up to date with matters of her Ministry. The spirit and commitment was unparalleled. Sushma Ji’s demise is a personal loss. She will be remembered fondly for everything that she’s done for India."

Swaraj, who was a senior Bharatiya Janata Party (BJP) leader, passed away after suffering a massive heart attack at AIIMS in New Delhi at the age of 67.

Union Home Minister and BJP president Amit Shah was also among the ones who paid their tributes to Swaraj's mortal remains on Wednesday morning.

Coming out of Swaraj's residence, Shah told media, "Myself and crores of BJP workers are sad today. Sushma ji emerged as a shining leader since the time of National Emergency. She served different ministries, as Delhi Chief Minister. She efficiently served the BJP governments under Atal Bihari Vajpayee and Narendra Modi.

Swaraj, who had won accolades from Indians staying both within the country and abroad for her strong performance as an External Affairs Minister in the first term of the Narendra Modi-led BJP government, did not contest the Lok Sabha polls this year.