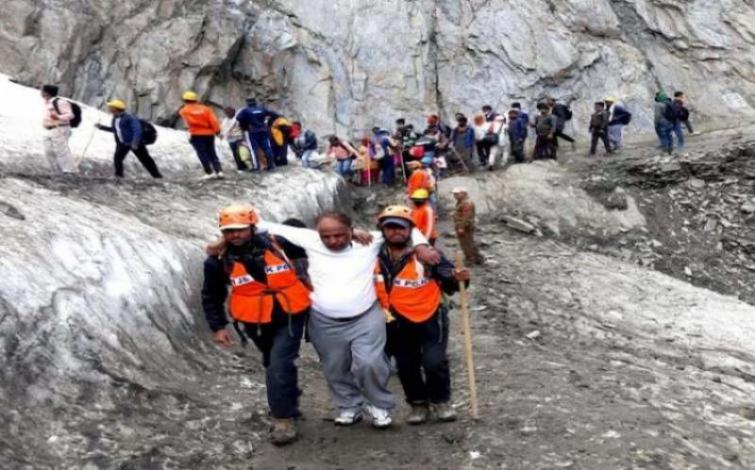 New Delhi, Aug 2 (IBNS): The Indian Army on Friday said that intelliegence reports have revealed that terrorists backed by the Pakistan Army are trying to disrupt the Amarnath Yatra.

The army said snipper rifle and landmine were recovered on the path where the pilgrimage takes place.

Chinar Corps Commander Lt General KJS Dhillon told reporters: "In the last three-four days, there were confirmed intelligence reports that terrorists backed by Pakistan and its army are trying to disrupt Amarnath Yatra."

He said a thorough search was conducted.

"We had major successes in these searches," he said.

He said, "Repeated infiltration efforts are being made across the LoC. A Pakistan army landmine and a sniper rifle were found on route of the yatra."

He said the yatra route has been 'sanitized' very well.

"Operations are still going on," he said as the Army and police held a joint press conference.

Officials revealed at the news conference that a landmine with Pakistan ordnance factory markings and an M-24 American sniper rifle with a telescopic sight were recovered.

A huge number of devotees participate in the Amarnath Yatra every year.

The Army made the revelations at a time when the country is gearing up to celebrate the Aug 15 Independence Day.

Earlier, Intelligence sources told IBNS that a Pakistan emboldened by the visit of Prime Minister Imran Khan to the United States, has reactivated its terror launch pads against India in the Pakistan Occupied Kashmir (POK) with plans to trigger something big in Kashmir.

"Terror launch pads in PoK, which were dismantled and pushed back to interior, have now been reactivated," sources told IBNS.

According to Indian sources, Jaish-e-Mohammad chief  Masood Azhar's brother Ibrahim Azhar had been relocated to PoK to oversee the affairs.

Indian sources said  the Indian troops have been sent there (Kashmir) for this reason, amid heavy exchange of cross-border firing between Indian and Pakistani soldiers  along the Line of Control in  Jammu and Kashmir on Tuesday claiming the lives of two Pakistani soldiers.

One Indian trooper was killed in another sector during the latest ceasefire violations by Pakistan. Pakistan even resorted to artillery firing in Tangdhar sector forcing a befitting response by Indian troopers.