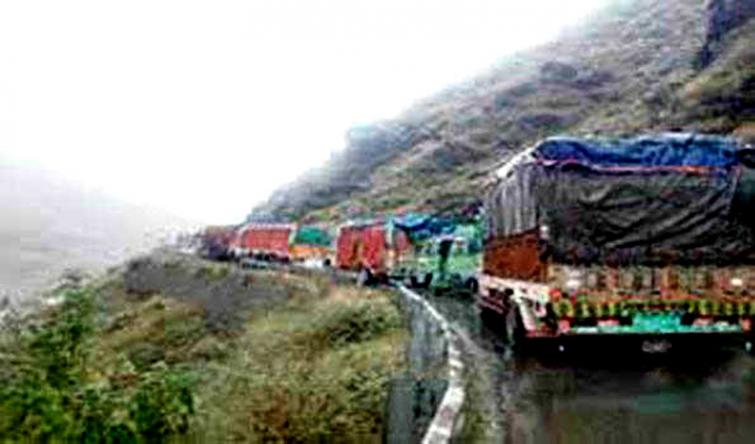 Partial traffic restored on Kashmir highway, way made only for stranded vehicles

Srinagar, July 31 (UNI): Partial traffic has been restored on Srinagar-Jammu national highway, the only all weather road connecting Kashmir valley with the rest of the country, after remaining suspended on Wednesday for about 12 hours due to landslides, triggered by rain at several places, official sources said.

However, only stranded vehicles were allowed to move, the sources told UNI Wednesday evening.

Yatra from Bhagwati Nagar, Jammu, base camp to Baltal and Nunwan Pahalgam base camp was suspended Wednesday due to closure of the highway.

He said Border Roads Organisation (BRO) and National Highway Authority of India (NHAI), responsible for maintenance of the highway immediately put into service sophisticated machine and men to clear the landslides. However, he said, due to continued shooting stones and landslides, road clearance operation was hampered.

He said after about 12 hours, traffic resumed on the highway when the landslides and mudslides were cleared, particularly in Udhampur area.

However, he said, no fresh vehicle was allowed and only vehicles stranded since last night were allowed to move towards their respective destination.

However, civilian traffic is allowed to ply only in the afternoon after clearance of Amarnath yatra and security force convoy daily.

Meanwhile, the historic 86-km-long Mughal road, connecting Shopian in south Kashmir with Rajouri and Poonch in Jammu region was through for traffic.

The 434-km-long Srinagar- Leh national highway was also through for both way traffic.