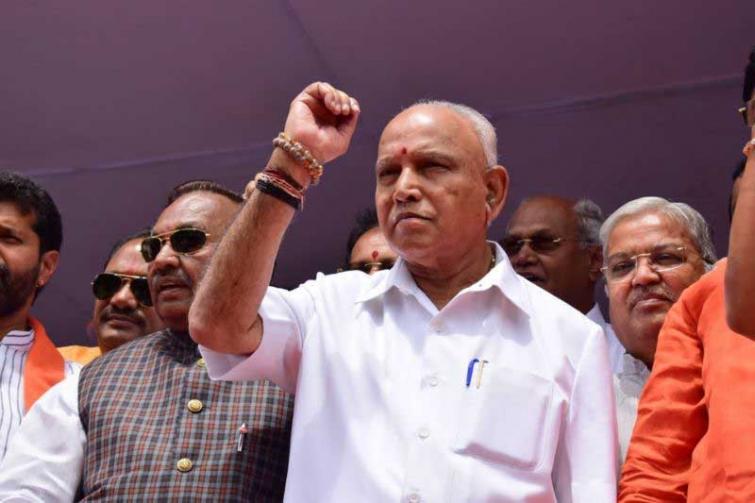 Bengaluru, July 26 (IBNS): Bharatiya Janata Party (BJP)'s BS Yeddyurappa is set to become the Karnataka Chief Minister for the fourth time as Governor Vajubhai Vala has agreed to the saffron leader's claim to form the next state government.

"I met the Governor to stake claim to form the government. The Governor has agreed for a swearing in ceremony today. I will take the oath by 6-6:15 pm," Yeddyurappa told media.

Yeddyurappa staked claimed three days after the Congress-Janata Dal Secular (JDS) government failed to win the trust vote in the Vadhan Soudha, getting only 99 votes as opposed to BJP's 105. The trust vote was called by JDS leader and then Karnataka Chief Minister, HD Kumaraswamy, amid the political turmoil over several Congress-JDS MLAs' resignations.

However, the BJP, which is the single largest party, is short of the majority mark 112 after Ramesh Kumar, the Speaker of the Assembly, disqualified three of 17 rebel MLAs last night.

The disqualification means they won't be able to contest any elections till 2023, when the next state polls will take place. The three MLAs- Ramesh L Jarkiholi, Mahesh Kumathahalli and R Shankar- who were guaranteed ministerial berths in the would be BJP government are likely to move the Supreme Court on Friday.

Substituting the three disqualified MLAs, the House strength falls at 222 from original 225.

After the BJP emerged as the single largest party in the Karnataka assembly elections last year, Yeddyurappa had sworn in as the Chief Minister. But unable to prove majority in the 225-member assembly, Yeddyurappa had to resign after two days paving way for the Congress-JDS to assume power.