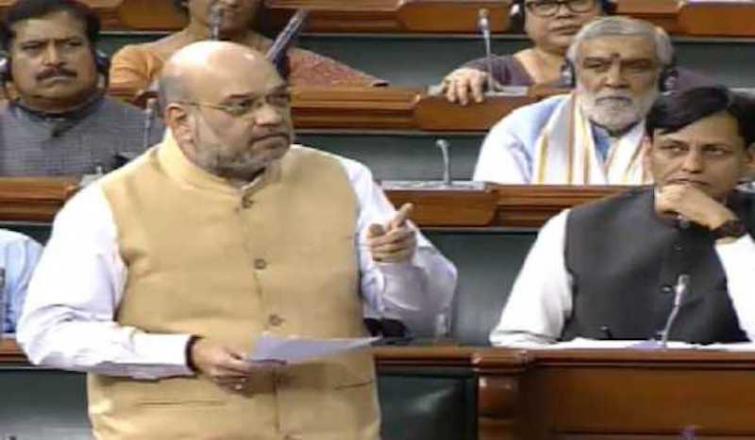 Shah, known for his no nonsense approach, thundered at the Hyderabad MP to show patience and listen to the debate.

Some provisions in the much-talked about Amendment Bill were contested by the Opposition parties.

Shah's assertiveness put the Opposition on the back foot. Just before the voting exercise, Congress floor leader Adhir Ranjan Chowdhury said: "We all are in favour of the bill."

Speaker Om Birla said: "As I have given a ruling once that there will be division voting, we will go ahead with that."

During the debate, several Opposition members spoke against the bill and contended that while they all were one to fight the terror menace, the changes proposed in the NIA Act could make India a police state.

Ruckus prevailed for a while when Owaisi wanted to raise objection to some remarks of Bharatiya Janata Party MP from Baghpat, Satya Pal Singh, a former Mumbai police commissioner.

As soon as the AIMIM leader rose to protest against the BJP MP's remarks that during the United Progressive Alliance regime, there used to be political intervention and "tele calls" with regard Ishrat Jahan case - related to Gujarat police encounter - the Union home minister Shah was up on his feet asking the Hyderabad MP to maintain silence and give a patient hearing to the debate.

"I beg to differ, why did you keep silent when DMK member A. Raja was speaking and now want to make a point. My submission is you should listen to what Satya Pal Singh is saying. Please show some patience and your ability to listen too," Shah said firmly.

Owaisi said Singh should provide proof of his allegation that the then Hyderabad Police commissioner was asked by a leader to toe the political party's line and change the course of investigation in a particular case. The cop was also threatened that otherwise he would be transferred out.

Just as Shah rebuked the flamboyant AIMIM leader, someone from the Opposition questioned: "Are you trying to scare us?"

Mr Owaisi was also categorical. “What powers are you giving to NIA officer when you send him abroad to investigate someone? Don't compare us to (two western countries) and intrude on other people's sovereignty."

The home minister retorted saying. "I am not trying to scare anyone. But if the fear is inherent then what can I do?"

In his response, Shah was again very assertive and maintained that the Modi government in no way would allow misuse of the law or the NIA Act itself.

But he went onto add: "Let me make it categorically clear. The Modi government has no intention to misuse NIA Act. Our only goal is to finish off terrorism but as we eradicate the terror menace, we will not see at the religion of the accused while taking action."

The home minister asserted that the Modi government will make no compromise on the issue of fighting terror and maintained that Pakistan will be even "compelled" to ink the South Asian Association for Regional Cooperation Treaty on terror.

Responding to clarification sought by Trinamool Congress member Kalyan Banerjee, Mr Shah said: "There is a SAARC treaty on the issue, but Pakistan has not signed it... But Pakistan will be compelled to sign it one day."

He also told the Lower House of Parliament amid repeated thumping of desks by National Democratic Alliance members that "even without NIA, there are various other measures which can be adopted against Pakistan on the issue of terror".

"We have other means like surgical strike, aerial strike...," he said.

Strongly defending the bill, he said just because Pakistan does not join on the matter and has no such pact, whether it will be justified to give up a probe if a Pakistan-inspired terrorist attacks Indian embassy in the US.

Even Pakistan will be compelled to sign the SAARC treaty one day, he said.

Mr Shah also said that the UPA-regime under Manmohan Singh has made "U-turn" in the Samjhauta blast case.

To a specific query from Supriya Sule of Nationalist Congress Party, the home minister said those responsible for the murder of M.M. Kalburgi and other intellectuals will also be booked.

During the debate, Shah slammed the UPA for repealing POTA and said such a decision was politically motivated and also added that repealing the law in 2004 was "not a right step".

The home minister lashed out at the erstwhile UPA regime for repealing the Prevention of Terrorism Act in 2004 and said this was done purely on political consideration and to pursue the politics of "vote bank".

Arguing with the Hyderabad MP, the home minister said: "Mr Owaisi and everybody's secularism stands exposed... we listened patiently when they all were speaking. You too should have the habit of listening Owaisi sahab."

There were fierce arguments between the two sides more than once. Speaker Om Birla ruled that much of it said during the din would not go on record.

Referring to the 2007 Samjhauta Express blast, Shah said the UPA regime had made a U-turn and also maintained Owaisi did not criticise Congress-led dispensation.

Shah remained aggressive and insisted that there should be "division".

Shah asked for division. "Let it be clear today, who is with the bill. Who wants to fight the terror and who is against it."

Put to vote, 278 members voted in favour of the bill while six against.