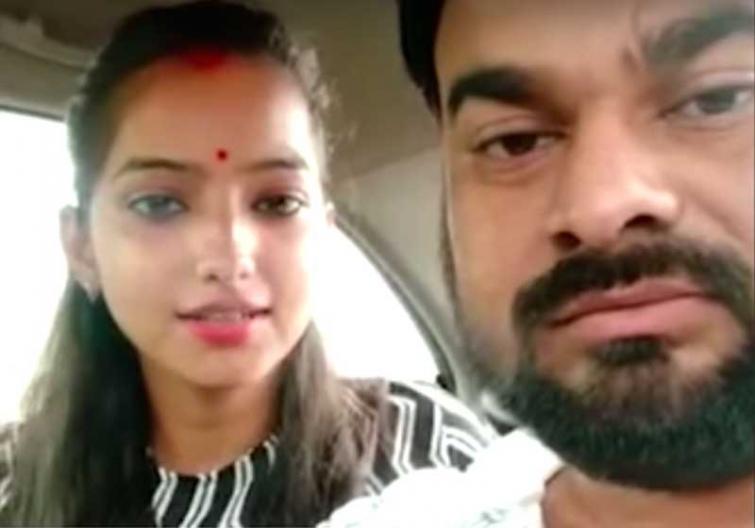 Bareilly, July 11 (IBNS): The daughter of a BJP MLA has uploaded videos on social media requesting protection from her father and his goons after she married a Dalit man.

Rajesh Mishra, aka Pappu Bhartol, is the MLA from Bithri Chainpur constituency of Bareilly district.

Sakshi Mishra, 23, Rakesh's daughter, in the video, says she has married Ajitesh Kumar, 29. Police said they got married last Thursday.

In the video, Sakshi says: "We have got married and my father and his goons are hounding us. We are tired of running around."

She requests security from the Bareilly police chief.

Dad, stay out of my marriage: Daughter of UP BJP MLA posts video after marrying Dalit, claims threat to life https://t.co/HVZly4MaCo pic.twitter.com/rIBW19viKd

In a separate video she names her father and Vicky Bhartol and asks them to live and let live. She also asks the MLA to stop harassing Ajitesh's family "because they are not at fault".

"If anything happens to me or anyone in Ajitesh's family, my father, Vicky Bhartol and Rajiv Rana would be responsible," she says.

Reacting to the development, Sakshi's father Rajesh Misra said he was not opposed to the marriage but had other concerns.

“I am not opposed to the marriage of my daughter. My only concern is that the boy is more than nine years older than her. As a father I am also concerned about their future because the boy doesn’t earns much,” Hindustan Times quoted him as saying.

“I can never even imagine to harm my daughter. I want them (the couple) to return home. I have also informed the party high command about the matter,” said Misra.