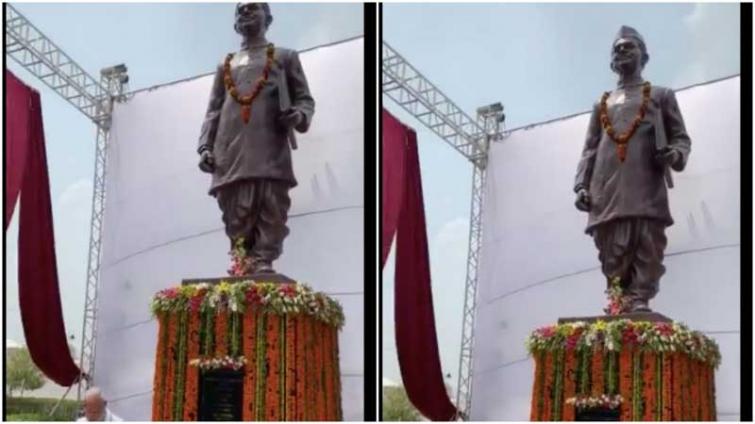 After unveiling the statue, the PM and other dignitaries also paid floral tribute to Shashtri on whose name the Varanasi airport is dedicated. UP Chief Minister Yogi Adityanath, BJP working president J P Nadda and UP BJP president Mahendra Nath Pandey were present during the brief function.

The statue of Shashtri was made by noted sculptor Ram Vanji Sutar, who made the 182-metre high statue of Sardar Patel, also called as statue
of Unity.

Tribute to an exemplary leader admired by all sections of society.

On landing in Varanasi, PM @narendramodi unveiled a statue of former PM Shri Lal Bahadur Shastri Ji. This statue is located at the Varanasi airport. pic.twitter.com/MWFBDzDsnK

Sponsored by Northern Coalfields Limited (NCL), the statue has been installed in the parking area of the airport.

In 2005, the Airport was named after Lal Bahadur Shastri. In 2014, a small statue of Shastri was installed at the entrance hall in the terminal of the airport. The Chief Minister inaugurated Lal Bahadur Shastri Memorial Museum in Ram Nagar in September last year. He also unveiled a life-size statue of the former PM and his wife Lalita Shastri.

Earlier, the PM was given a warm welcome at the airport on his arrival from New Delhi this morning. The CM , BJP working president J P Nadda, UP BJP president Dr Mahendra Nath Pandey along with local BJP leaders and officials were present at the airport. During the welcome, Mr Adityanath also presented a book to the PM.

The PM is slated to launch the BJP's membership drive, inaugurate the plantation campaign and inaugurate the Virtual Experimental Museum, during his four-hour stay in his parliamentary constituency.