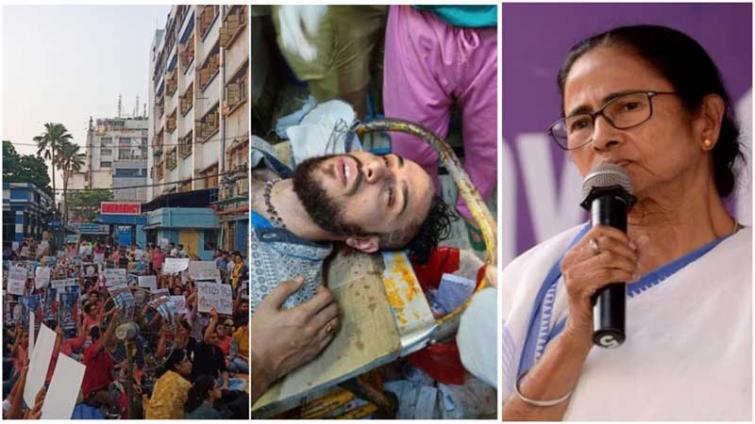 New Delhi, June 14 (IBNS): Doctors from Delhi, Mumbai and other cities across the country have decided to show support for their protesting colleagues in West Bengal where the strike demanding security of doctors entered the fourth day on Friday with the medical fraternity engaged in a standoff with Chief Minister Mamata Banerjee who a day ago issued an ultimatum to the doctors at the state-run SSKM Hospital to join work within four hours, but chose not to meet the agitating doctors at the NRS Medical College and Hospital.

Despite her ultimatum, the doctors' agitation continued with many raising questions on why the CM decided not to meet the doctors.

"She could sit on a dharna for a corrupt IPS office, but not come here and sit for us," said one of the agitating doctors at the NRSMCH where they were protesting an attack on junior doctors by a group of some 200 men brought from a particular locality in Kolkata after a nearly 80 year old patient, Md Sayeed, died.

The India Medical Association has declared “All India Protest Day” on Friday and expressed solidarity with the striking doctors.

All OPDs will remain suspended at New Delhi’s All India Institute of Medical Sciences (AIIMS) and the Safdarjung Hospital with over 3,500 resident doctors from the two hospitals striking work, said reports.

On Thursday night, with no breakthrough in the protest by junior doctors, Principal and the Medical Superintendent-cum-Vice-Principal (MSVP) of the Nil Ratan Sircar Medical College in Kolkata, which is the ground zero of the agitation, tendered their resignations.

Expressing regret over not being able to combat the crisis in the medical college, Saibal Kumar Mukherjee (Principal of NRSMC) and Saurabh Chattopadhyay (MSVP)  sent their resignations to the health department, which is headed by CM Mamata Banerjee.

Meanwhile, the health department had sent a letter to the superintendents of all state hospitals to make sure every doctor join work immediately or face strict action.

After a face-off with the protesting junior doctors at SSKM Hospital on Thursday afternoon, Mamata has now urged all to go back to work.

The junior doctors went for an indefinite strike across West Bengal after relatives of Kolkata's Tangra resident 75-year-old Md. Sayeed, whose death at the NRS Hospital prompted cries of medical negligence from them, brought some 200 people to the hospital and beat up junior doctors, seriously wounding Paribaha Mukhopadhayay on Monday night.

In a Facebook post, Banerjee said: ".......Health service is always dedicated to the patients. I, therefore, appeal to all to restore normal healthcare services to the patients without any further delay."

After paying a visit to the SSKM Hospital, Banerjee, amid sloganeering by the agitators, lost her cool and alleged that the protesters are "outsiders". She even sent an ultimatum to the agitators to join work within four hours or else they would face action. However, Banerjee's ultimatum didn't change the situation much.

"They are outsiders. The government will not support them in any way. I condemn doctors who have gone on strike. Policemen die in line of duty but the police don't go on a strike," she said. "The state spends Rs 25 lakh on each doctor and then they shirk work. This won’t be tolerated."

In the Facebook post, Banerjee tried to address the difficulties of several patients in getting medical treatment.

Banerjee said: "Today when I visited SSKM, I saw gatherings of outsiders of different political parties shouting slogans in hospital silence zones and stopping emergency services. Patient parties are crying and outdoor services are closed. I sent some patients to private hospitals for immediate treatment."

She also stated her administration took steps against culprits who had attacked Paribaha Mukhopadhayay. "I sent Commissioner of Police, Kolkata to talk to the junior doctors. 5 persons have been arrested and their bail prayers were rejected by Ld Court."

Reacting to Mamata's move, BJP leader Jay Prakash Majumdar said: "Mamata reacted exactly the way she is running the state -by threatening. The students needed compassion but she threatened them."

CPI-M leader Ashok Bhattacharya said: "Mamata is responsible for bringing the situation back to normal. She should have acted earlier."