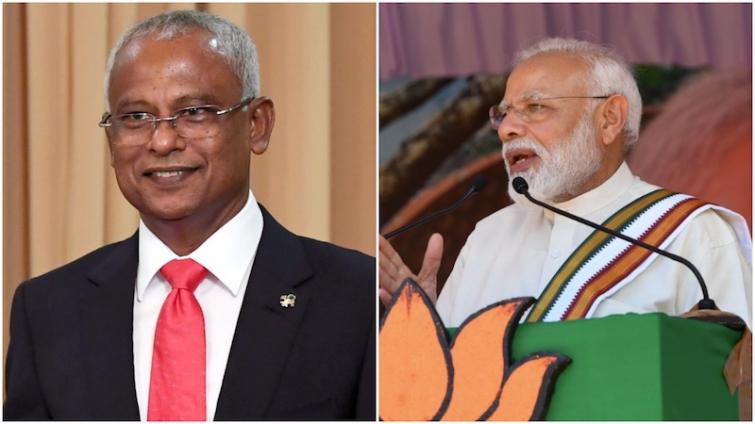 "President Solih has announced his decision to confer on PM of India Narendra Modi the Maldives highest honour accorded to foreign dignitaries, The Most Honourable Order of the Distinguished Rule of Nishan Izzuddeen during PM’s visit today. Namaskar, Swagatham," Maldives Foreign Minister Abdulla Shahid said in a tweet.

Mr Modi will make a two-day visit to the Maldives beginning Saturday.

This will be the first bilateral visit after BJP-led NDA retained power in the recently held Lok Sabha polls.

"We regard the Maldives as a valued partner with whom we share deep bonds of history and culture. Our bilateral relations with the Maldives have been greatly strengthened in the recent past. I am confident that my visit will further deepen our multifaceted partnership," Mr Modi said in a pre-travel statement on Friday evening.

The government of India is well geared up for multiple sector support and cooperation - right from building a cricket stadium to coastal vigil radar system - with the Maldives.

Mr Modi and the Maldives President Solih will be inaugurating a coastal surveillance radar system and a Comprehensive Training Centre (CTC) for Maldives national forces as part of a joint defence cooperation pact.

“The coastal surveillance radar system and the CTC are part of the Action Plan for defence cooperation,” Foreign Secretary Vijay Gokhale said in Delhi on Thursday.

Mr Gokhale also said that both sides are keen to give a boost to people-to-people relationship.

The Ministry of External Affairs is working with the Board of Cricket Control in India (BCCI) to train Maldivian cricketers after President Ibrahim Mohamed Solih had requested for India's assistance in developing the sport in his country.

"One of the focus in our ties with the Maldives is on people-to-people relationship and in looking at ways to strengthen it...Among the requests, which are under examination, is a cricket stadium in the Maldives. We expect to build it under the line of credit that we plan to give," Mr Gokhale has said.

India is likely to help Maldives build up a cricket stadium under the line of credit, Foreign Secretary has said.