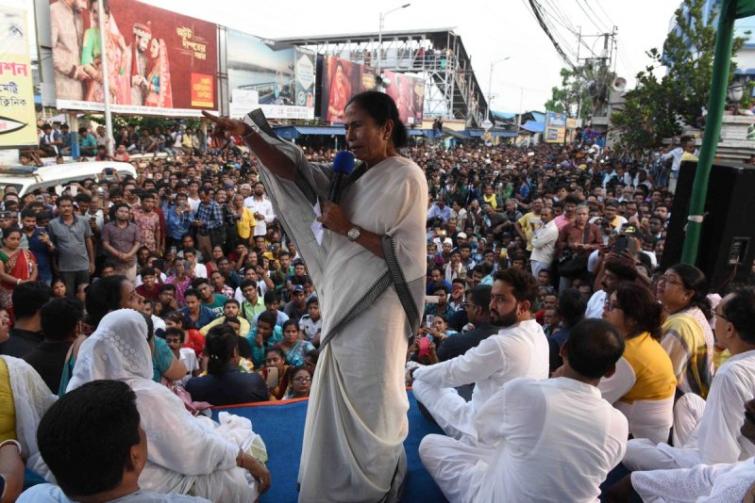 Mamata visits Naihati, vows to give reply to BJP's violence

Kolkata, May 30 (UNI/IBNS): West Bengal Chief Minister Mamata Banerjee on Thursday met the families of her supporters in Naihati, who were on a dharna, and said the Trinamool Congress will give a "proper reply to all the violence being brought on by the BJP." On the same day some videos went viral in which she was seen losing her cool when some alleged BJP supporters changed "Jai Shri Ram" at her motorcade.

Addressing people in Naihati, Banerjee said, "My government will bring all the criminals who have committed violence to justice."

An angry Mamata Banerjee also the same day confronted a crowd that chanted "Jai Shri Ram" when she was passing through Bhatpara area near Kolkata in West Bengal. She lost her cool against the alleged BJP supporters. The area is a stronghold of newly elected BJP MP Arjun Singh who was earlier with TMC. Singh defeated TMC candidate Dinesh Trivedi.

An angry Mamata Banerjee confronts crowd that chanted Jai Shri Ram when she was passing through Bhatpara area near Kolkata in West Bengal.She lost her cool against the alleged BJP supporters. The area is a stronghold of BJP MP Arjun Singh who was earlier with TMC. #bjpbengal #tmc

She reiterated her stand that she wants everyone to stay together, be Bengalis or non-Bengalis and alleged it was only a few non-Bengali goons from other states who created trouble here.

She also announced the setting up of Banga Janani Vahinis, comprising women, and Jai Hind Vahinis comprising youth in every block across the state to fight the "atrocities of the BJP."

"They will keep a close watch on all signs of violence and nip them in the bud, and even fight those who commit violence, if necessary," she stated.

"I urge women to set up Banga Janani Vahinis in every block and booth area to protect women," she said."The youths must set up more Jai Hind Vahinis across the State," she added.

"Members of these forces will be given uniforms and identity cards. And they will be steeped in the culture of Bangla. They will follow the ideals of Netaji," she stated.

"These committees will work in coordination. They will give a proper reply to the activities of the RSS," Banerjee mentioned.

"I have never discriminated between people belonging to different ethnicities or religions. Everyone is equal for me," she said.

"Those outsider ‘gaddars’ created fear and committed a lot of terror under the leadership of two ‘gaddars’. I hate the BJP with all my heart," the CM said.

Banerjee said she will seek a detailed report of the houses and vehicles that have been vandalised.

She also promised that her government will take action.

"Even before the new government at the Centre has been sworn in, atrocities are being committed against people all over the country," Banerjee claimed.

"I will never let Bangla become (violent like) Gujarat. I have come here to give moral support to you. I want the people here to be courageous and stand up against atrocities. Be brave!" she urged.

Hitting out at the Prime Minister, she said, "Modi Babu, please run the government. But if you think that you will impose President’s Rule here by setting up a terror factory, you are mistaken."

"I will say ‘Joy Bangla’ and ‘Jai Hind’ over and over again," she thundered.

"I appeal to all of you to say ‘Jai Hind’ when you meet people. Let people be happy with their own cultures. Cultures should not be imposed on people," she told the gathering.

"By June 14, I vow to remove all ‘kachra’ from Kanchrapara. I am asking all district leaders to send me details about the violence here," the CM said.

Banerjee said she will come to Barrackpore, Kanchrapara, Jagaddal and Naihati every now and then to take stock," she said detailing her plan of action.

"I love those non-Bengalis who have made Bangla their home. Come forward to fight these criminals who are committing atrocities. Don’t sell your self-respect to the BJP," she urged.

"Our struggle will continue. I will come here gain on June 14 to address a meeting," she said.

"Stay calm, stay in control. Rise up to the challenge of violence," Banerjee stated.