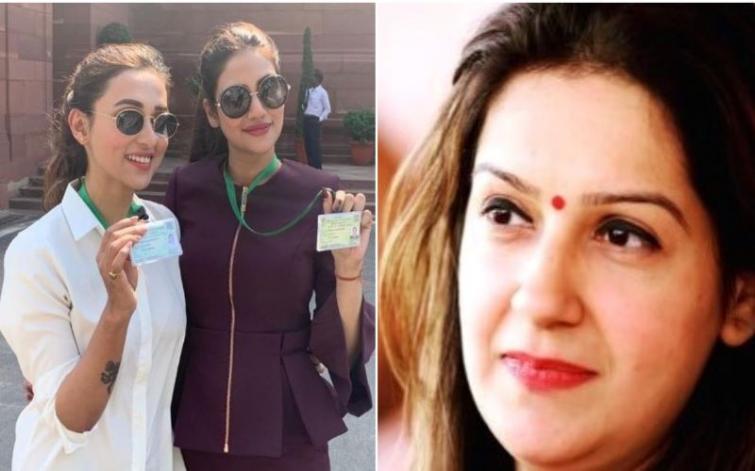 Loved what you both are wearing: Shiv Sena's Priyanka Chaturvedi supports Mimi, Nusrat amid controversy

Chaturvedi, who recently left the Congress and joined the Shiv Sena, admired the two actress-turned politicians' attires "in tune with the changing times".

She tweeted, "Dear @mimichakraborty and @nusratchirps , firstly many congratulations for your debut in the parliament and secondly I loved what you both are wearing, in tune with the changing times :) Keep rocking!"

Dear @mimichakraborty and @nusratchirps , firstly many congratulations for your debut in the parliament and secondly I loved what you both are wearing, in tune with the changing times :)

Chakraborty on Monday shared a picture on Instagram where she could be seen standing outside the parliament. She captioned the picture saying, "Remember your dreams and fight for themðŸ™"

Remember your dreams and fight for themðŸ™ #gratitude #Obliged

But the netizens did not spare her from trolling.

Shrestha Sharma even raised question on the newly-elected MP's attire. Sharma commented, "U actually don't know how to dress up. I hope it's not ur shooting place or ur holiday destination.Its an official purpose.altym chablamo ta sab jaygay chole na.self respect ta dhore rakhte jante hoy."

Chakraborty's Tollywood mate and her close friend Jahan was also not spared.

"You have become an MLA (MP actually). Now dress up properly while going to the parliament. The parliament is not your shooting floor," another user commented.

But this is not the first time the two young MPs are trolled. Both Chakraborty and Jahan faced heat on social media after they were nominated as the Lok Sabha poll candidates by TMC chief Mamata Banerjee.

Even several people raised question as to how "elite people" of Jadavpur elected Chakraborty, who was embroiled in several controversies during her campaign, as their representative.

When IBNS had asked her about the controversies, Chakraborty said: "Firstly I don’t care about what people are saying and also the trolls and memes, because I am unstoppable. Nothing in the world can stop me from doing what I want to do. I don’t want to give any kind of importance to stupid, insane people by saying something about them. I don’t want to give undue importance to such people."

Chakraborty had courted a controversy after she was found wearing gloves while shaking hands with some people and using a towel to sit on a rickshaw, raising questions on her "mass representative" image.

CPI-M leader Surjya Kanta Mishra had raised question on the candidature of Jahan whose name had come to the headlines during the Park Street rape case, which was termed as a "made-up event" by West Bengal Chief Minister Mamata Banerjee.

Amid all the controversies, trolls and criticisms, both the actresses made their way to Parliament despite TMC's dismal performance in the polls. The TMC managed to win only 22 seats while the Bharatiya Janata Party (BJP) made a deep inroad in West Bengal by winning 18.