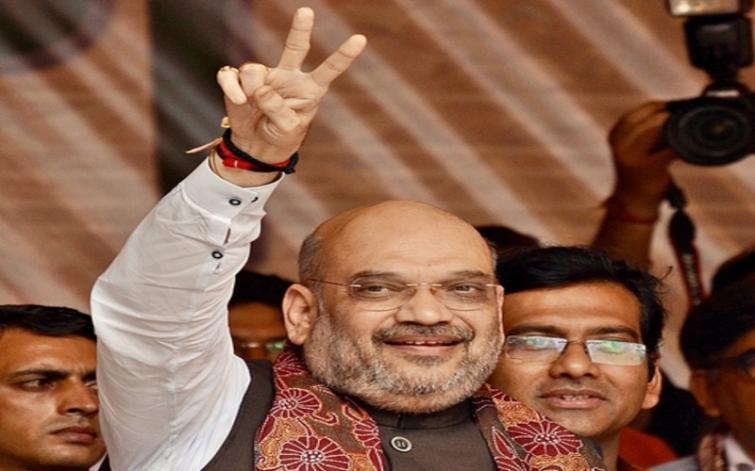 The saffron brigade for the first time bagged a double digit winning 18 seats (from 2 in 2014), making the CPI(M) led Left Front a non-existent to Lok Sabha, and pounded major share from Mamata Banerjee led TMC and reduced Congress to two in the 42-seat poll in Bengal.

TMC also became a truncated side in its only bastion in India with now 22 from record 34, Congress edged past only two, Adhir Ranjan Chowdhury (Baharampur) and Malda South Abu Hasem Khan Chowdhury, from four, and CPI(M) drew blank from 2 in 2014.

" We had aimed for at least 23 seats in Bengal but some missed out with thin margin, like Malda South, and couple of others owing to some logistical problems," Mr Ghosh told a media conference.

Before the conference Ghosh welcomed some of the winning candidates like Arjun Singh from  Barrackpore and Deboshree Chowdhury from Raiganj, the two ousted sitting MPs of Dinesh Trivedy (TMC) and Md Salim of CPI(M).

Ghosh said their winning journey just began as the people of Bengal are looking for a change of guard, which would be completed in 2021, the year of assembly poll in Bengal.

He believed that unless the TMC regime was totally defeated, the restoration of democracy will not be completed and warned if any attack was organised against the saffron brigade the BJP would not sit with hands tied.

Unleashing of terror on the BJP supporters for past four years and killing of nearly 40 supporters during 2018 panchayat poll by the TMC goons was still causing pain to rank and file. " Yes we are for sabka saat sabka vikash but at the same we would not keep quiet if any further attack on us takes place like what Arjun Singh had been experiencing since his joining the BJP, " Mr Ghosh said while pointing out at the newly elected MP from Barrackpore.

He said all the winning members would go to Delhi and join in the swearing in ceremony.

Among the winners BJP has two union minsters in the outgoing parliament - Babul Supriyo and SS Ahluwalia - won from Asansol and Burdwan-Durgapur seats respectively. Another Soumitra Khan, won from Bishnupur, was also MP from TMC ticket.

Ghosh said they are going to Delhi and talk to party chief regarding his march on Kolkata streets for victory celebration and decide the date.

He said both the PM and Mr Shah visited Bengal for campaigning not less than 17 times each.