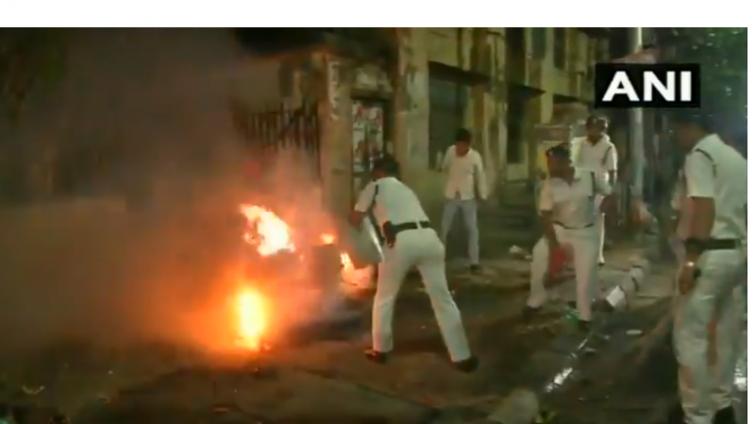 As the rally approached the College Street area of North Kolkata, violence erupted with stone pelting by both parties.

According to local TV channels, students were stuck inside the Vidyasagar College and the University of Calcutta and many were attacked allegedly by BJP workers.

Local police had to call in more force to take control of the situation and douse the fire. The police had to resort to lathicharge to disperse off the violent crowd.

Speaking to ABP Ananda, BJP president Amit Shah alleged that his roadshow was attacked by TMC workers from inside the colleges.

"Our party workers were attacked and the police did not help us. In fact, they stood there as mere spectators. The roadshow had to be stopped abruptly. I was not allowed to visit the house of Vivekananda and am really upset about it," he told the news channel.

Accompanied by BJP's North Kolkata candidate Rahul Sinha, Amit Shah led a massive roadshow in the city on Tuesday with the aim to showcase BJP's strength just days before people vote in the seventh and final phase of the Lok Sabha polls on Sunday. 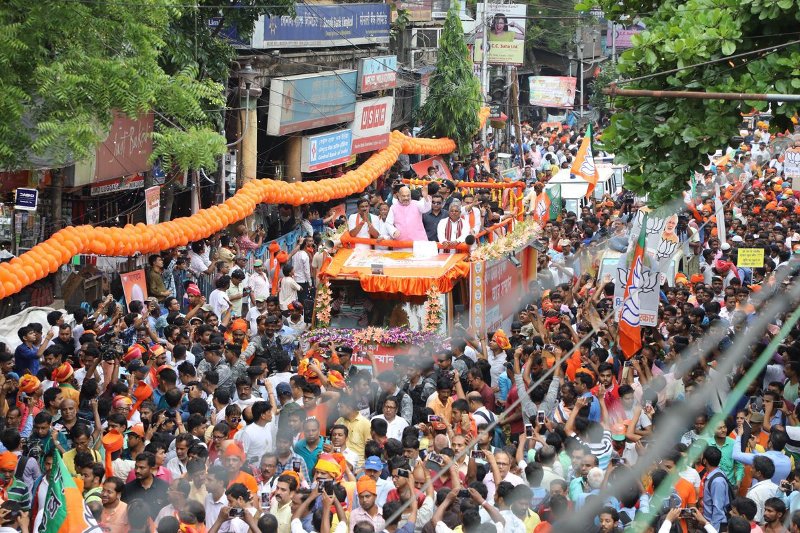 Dance, music and mythological costume extravaganza jazzed up the roadshow initially even though several of BJP posters and banners were removed or dismantled ahead of the road campaign.

BJP is aiming to increase its seats in Bengal, which is ruled by Mamata Banerjee's Trinamool Congress.

Drummers and people dressed as Hindu deities took part in the rally that covered more than three kilometres.People were seen dancing on a 'Jai Shree Ram' song as the roadshow proceeded. 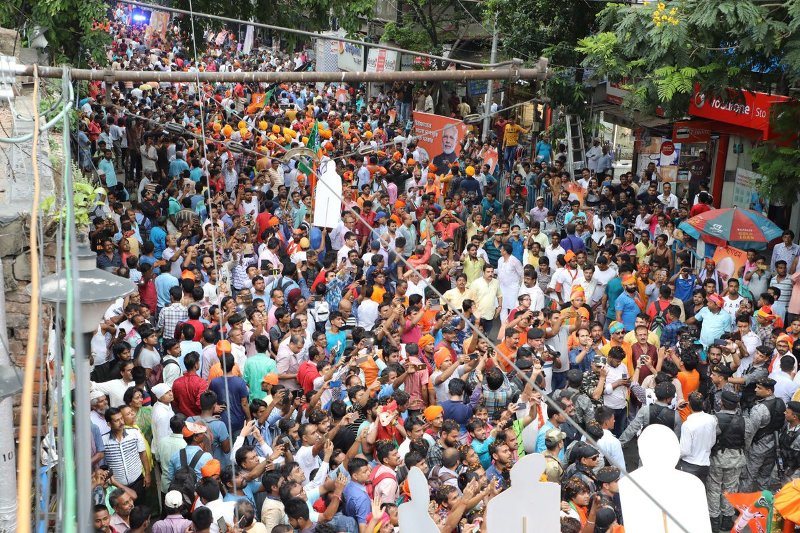 BJP's observer Kailash Vijayvargiya alleged that the TMC government attempted to skirt the road show by removing and demolishing hoardings and posters of Prime Minister Narendra Modi and Amit Shah along the roads which leads to the ancestral home of Swami Vivekananda in north Kolkata.

He alleged that the goons of the TMC and policemen forcefully removed the posters saying they were abiding the Election Commission's order.

He said the BJP had permission from the Election Commission to hold road show of Amit Shah.

Vijayvargiya also had a verbal duel with a police officer over the erection of a stage at Subodh Mallick Square.

However, the posters were again put back by the BJP activists, who also broke the windscreen of a van at Dharmatala.

Rahul Sinha tweeted: "Check this out how @MamataOfficial & @AITCofficial persons removed our flags and hoarding which were put on for the #MegaRoadShow of @AmitShah ji in Kolkata North."

Check this out how @MamataOfficial & @AITCofficial persons removed our flags and hoarding which were put on for the #MegaRoadShow of @AmitShah ji in Kolkata North. @BJP4Bengal #RSCampaign2019 #LokSabhaElections #Elections2019 pic.twitter.com/UTEQ8xhUZe 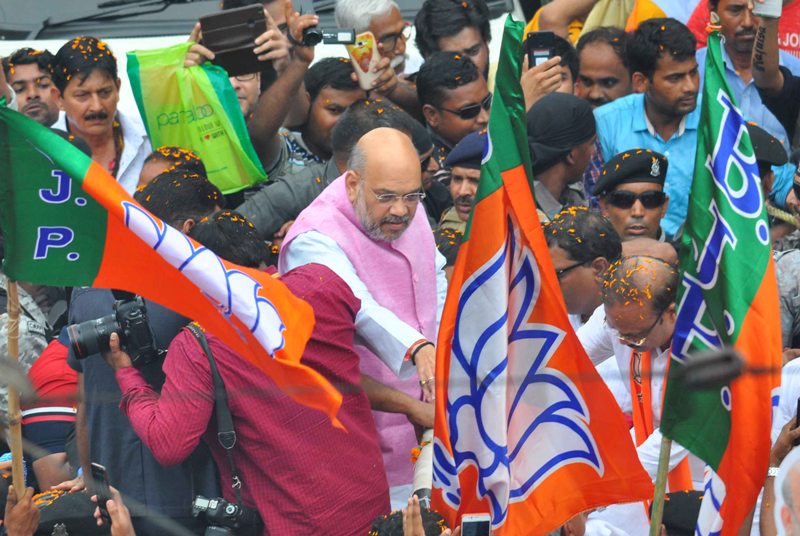 Amit Shah has challenged West Bengal chief minister Mamata Banerjee to arrest him as he chanted 'Jai Shree Ram' while addressing a rally in the state a day ago.

West Bengal has witnessed violence in the last six phases of the Lok Sabha polls and its run-up with the BJP emerging as the major opposition force against the ruling TMC.

"I am chanting Jai Shree Ram now, I am leaving for Kolkata. Arrest me if you can," Shah had thundered at a rally at Joynagar near Kolkata in South 24 Parganas district.

Jai Shree Ram is a religious slogan often used by Hindus to praise Lord Ram. It has now become political with the BJP virtually appropriating it.

The entire row over the Jai Shree Ram slogan started recently when a video went viral on social media where a group of people were seen chanting the slogan when Mamata Banerjee's convoy was passing through an area.

In the video, the CM was seen stopping her car and chasing those who chanted the slogan.

BJP and TMC are engaged in a stiff political battle in Bengal.

In the last phase of voting on Sunday, people will exercise their franchise in nine seats.

Amit Shah had earlier said that his party will win 23 seats in Bengal this year.