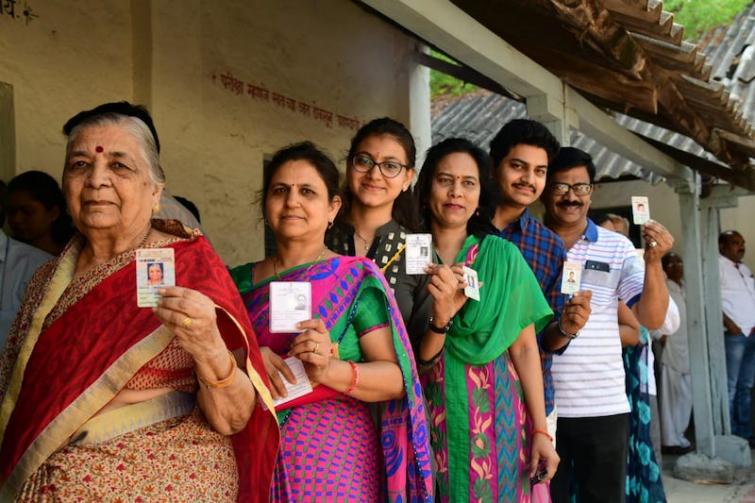 Chandigarh, May 12 (UNI) Nearly 63.5 per cent of 1,80,56,896 voters exercised their franchise in the all ten Haryana parliamentary constituencies until 1800 hrs on Sunday.

However, the polling percentage will increase further as the voters, who reached the polling stations by 1800 hrs, are still standing in queues to cast their votes.

Haryana Joint Chief Electoral Officer Dr Inder Jeet this evening said that the highest 67.51 per cent polling was recorded in Kurukshetra while Karnal recorded the lowest of 56.92 per cent. Besides, Ambala recorded 61.55 per cent, Hisar 67.07 per cent, Sirsa 65.47 per cent, Rohtak 64.73 per cent, Faridabad 58.56 per cent, Gurgaon 58.31 per cent, Bhiwani-Mahendergarh 63.74 per cent and Sonepat parliamentary constituency recorded 64.11 per cent polling.

Sitting MP and Congress Rohtak candidate Deepender Hooda, son of former chief minister Bhupinder Singh Hooda, alleged that Haryana Minister of State Manish Kumar Grover entered the polling booths forcibly and intimidated the voters in Rohtak. He had lodged a complaint in this regard with the Returning Officer.

While denying the allegations, Grover said that he went at Bharti Tek Kanya school booth in Kathmandi after he got information that senior Congress leader Bharat Bhushan Batra and his supporters were creating problems in Kathmandi.
Meanwhile, the legal cell of the BJP also lodged a counter complaint against Batra and his supporters, accusing them of voter intimidation and booth capturing.

Barring a minor incidents, the polling is progressing peacefully in the state.
The police caught three vehicles bearing temporary registration number in front of Vishwakarma School in Rohtak assembly constituency of the Rohtak parliamentary area and recovered 15 cartridges of 32 bore, two wooden sticks and two number plates bearing different registration numbers from these vehicles. The police also arrested two persons along with these vehicles.

Polling, which began at 0700 hours, was sluggish in the morning but it picked up later. Reports of malfunctioning of Electronic Voting Machines (EVMs) came from a certain places in Kurukshetra parliamentary constituency.

As many as 1,80,56,896 registered voters, including 97,16,516 male, 83,40,173 female and 207 transgenders, are expected to exercise their franchise at 19,442 polling stations across the state to decide the fate of 223 candidates including 11 women who are in the electoral fray.
Around 67,000 Haryana police personnel and 95 companies of paramilitary forces have been deployed in the state to ensure free and fair polling.
The Election Commission has deployed about 1.25 lakh employees or officers on election duty and 22, 819 Control units, 44,374 Ballot units and 24,451 VVPATs machines would be used in the Lok Sabha elections.

Several national and state leaders held rallies and road shows in favour of their candidates during the around month-long campaigning in the state.

In 2014 general elections, the BJP won seven seats, the INLD two and the Congress retained the Rohtak Lok Sabha seat.

The result will be declared on May 23.