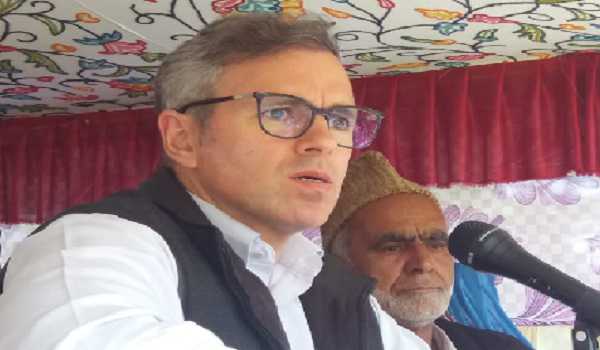 Anantnag, Apr 27 (UNI) National Conference (NC) Vice President Omar Abdullah on Saturday said that J&K does not face as much threat from neighboring country Pakistan or the muzzle of gun as it faces from the forces that are hell-bent to destroy the special status of the state.

He said that keeping the challenges the state is facing in view the people have to make a right choice in the ensuing elections while choosing their representative for Lok Sabha.

Addressing a public meet in Kund valley, Devsar, Mr Abdullah, who is the former chief minister of the state, said, “Any one holding a public post whether a governor or a chief minister in our state has to take oath on state constitution. However anti-state forces are not able to digest that realism. This has become a scorn in the eyes of those forces as have revived their vows to destroy the special constitutional position of our state in their manifesto.”

He said, however, they fail to understand that the erstwhile Dogra ruler Hari Singh didn’t merge with the union, he had only acceded with the dominion of India on three subjects. “While as the rest of princely state’s subsequently merged with the union, the state of Jammu and Kashmir chose not to sign the merger papers. Our leadership had long drawn discussions with the GOI; the outcome of the negotiations came forth in the shape of Delhi Agreement. Our state under the undisputable leadership of Sher- e- Kashmir was able to secure itself a state flag and a special status within the union of India,” he said.

“Today we see forces as are hell-bent to destroy the state’s special position contrive hard to do away with the constitutional provisions of Art 370, Art 35-A that confer special status to our state. The fact remains that Maharaja would not have signed Instrument of Accession had New Delhi not taken an undertaking to protect the individual character of the state. Those who are questioning the vitality of Art 370, Art 35-A, are unwaveringly questioning the rudiments of accession of the state with the union of India. Any assault on the special status of our sate will without doubt cast a shadow on the fundamentals of accession,” he added.

Underscoring the need of sending a credible and strong voice to Lok Sabha, he said, “The ensuing elections provide us an opportunity to send a person to parliament who could debate on the issues pertaining to our state, the one who could fight for our unique identity and special status within the union. Keeping in view the challenges our state is facing we chose to field retired Justice Hassnain Masoodi from the Anantnag Parliamentary seat. He has the necessary political acumen, to fight for our state. A legal luminary, Masoodi sahib is the most suitable person to represent us in Parliament.”

Abdullah said that the others who are in the fray of Anantnag parliamentary election lack on all fronts to take on the challenges the state is facing. “On one side we have a Congress candidate, who if elected to Parliament cannot take on the forces as aggressively as NC candidate Masoodi can. The Congress candidate would obviously be bound by the party’s dictate. Moreover much of the state’s special status was obliterated by the Congress party, and what was left was subsequently surrendered by PDP before BJP for the lust of power. We have Mehbooba in the fray as well, whose political slyness and bankruptcy is known to all. How can she raise voice for state in parliament when she couldn’t do that in 2008, when the sate was in flames because of Amarnath Land agitation?” he alleged.