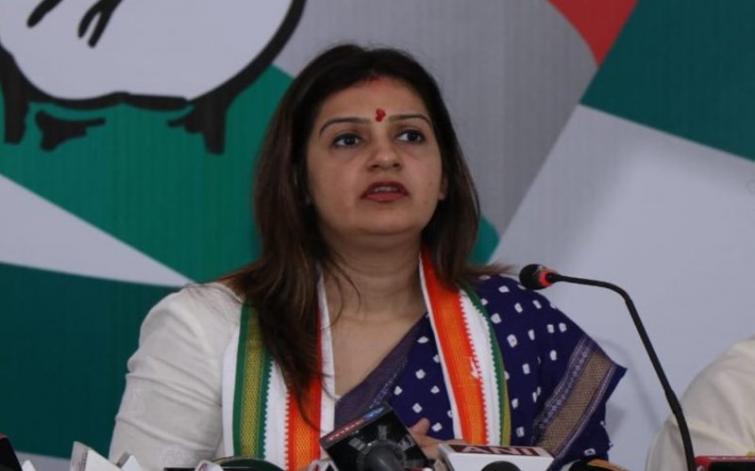 New Delhi, Apr 19 (IBNS): Days after hitting out at her own party for reinstating people who had abused her, Congress leader and spokesperson Priyanka Chaturvedi on Friday resigned from all posts of the grand old political outfit. Media reports said she is likely to join the Shiv Sena.

In her resignation letter written to Congress president Rahul Gandhi, Chaturvedi said in one part, "In the last few weeks certain things have convinced me that my services are not valued in the organisation and that I have reached the end of the road. I also feel the more time that I spend in the organisation will be at the cost of my own self respect and dignity."

I am absolutely overwhelmed and grateful with the love and support I have got across board from the nation in the past 3 days.
I consider myself blessed with this immense outpouring of support. Thank you to all who have been a part of this journey. pic.twitter.com/WhUYYlwHLj

On Wednesday, the 40-year old politician dropped a bombshell in the election season by tweeting, "Deeply saddened that lumpen goons get prefence in @incindia over those who have given their sweat & blood. Having faced brickbats & abuse across board for the party but yet those who threatened me within the party getting away with not even a rap on their knuckles is unfortunate."

Deeply saddened that lumpen goons get prefence in @incindia over those who have given their sweat&blood. Having faced brickbats&abuse across board for the party but yet those who threatened me within the party getting away with not even a rap on their knuckles is unfortunate. https://t.co/CrVo1NAvz2

Some Congress leaders in Uttar Pradesh had allegedly misbehaved with Chaturvedi while she was attending a press conference at Mathura.

But media reports said they were reinstated in the party for earning popular support after some initial action like suspension.

A blogger and book reviewer and mother of two, Chaturvedi was a popular face of Congress now as a spokesperson and she recently took on Bharatiya Janata Party (BJP)'s Smriti Irani by mocking her for her educational qualification claims.

After Union Minister Smriti Irani declared that she did not complete her graduation, Chaturvedi  mocked the actor turned BJP leader for changing her educational qualifications.