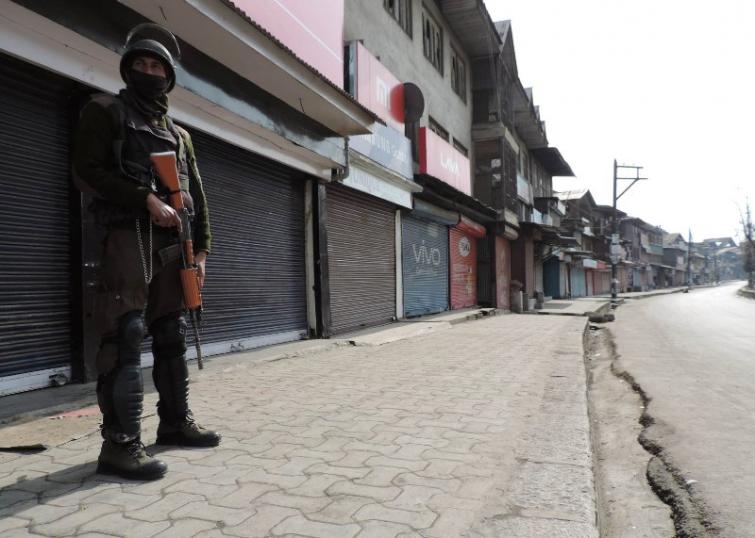 Srinagar, Apr 18 (UNI) Normal life was on Thursday crippled due to a strike called by separatists in poll-bound central Kashmir, where electorate are casting votes to elect their representative for Srinagar Parliamentary constituency in the second phase of Lok Sabha elections.

A police official said there were no restrictions in any part of the valley though security forces have been deployed in strength, particularly in poll-bound central Kashmir -- spread over Srinagar, Budgam and Ganderbal -- to maintain law and order.

“Three-tire security has been put in place to provide safe and secure environment to voters, who are exercising their franchise to elect their representative from nine candidates contesting from Srinagar Lok Sabha seat,” he said.

Shops and business establishments were closed and traffic was off the road in downtown, civil lines and uptown Srinagar though few private vehicles, particularly two-wheelers, besides three-wheelers, could be seen plying on some routes.

Additional security forces, wearing bullet proof jackets and holding weapons and lathis in their hands, were seen patrolling the streets in Srinagar areas to prevent any untoward incident. Security forces have also deployed in strength around polling stations to maintain law and order.

Life was also paralysed in the central Kashmir districts of Ganderbal and Budgam with all shops and business establishments shut and traffic off the roads due to the strike.
The Joint Resistance Leadership (JRL) has called for a strike on Thursday against elections in poll-bound areas in the valley.

Over 12.95 lakh voters will seal the fate of 12 candidates in fray, including former chief minister Dr Farooq Abdullah, who is seeking re-election, from Srinagar Lok Sabha seat, spread over three central Kashmir districts of Srinagar, Budgam and Ganderbal.