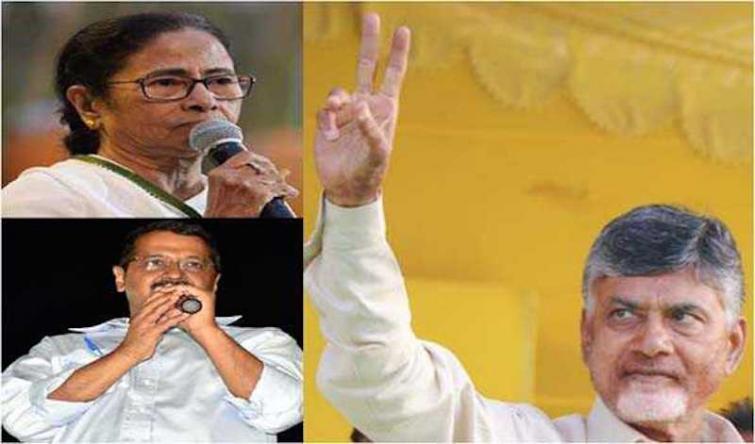 Visakhapatnam, Mar 31 (UNI): At a time when the Mahagathbandhan (Grand Allinace) is grappling with dithering and dissension, leaders of the various non-BJP political parties geared up here on Sunday in a show of strength and support of Chandra Babu Naidu’s Telgu Desam Party ahead of the April 11 Lok Sabha and Assembly polls in Andhra Pradesh.

As the poll fever grips the nation, the Mahagathbandhan is slated to conduct a massive rally here that will be addressed among others by West Bengal Chief Minister Mamata Banerjee, Delhi Chief Minister Arvind Kejriwal besides Andhra Chief Minister Chandra Babu Naidu.

"Today we will witness a mammoth gathering" of people who have come from far and wide to hear the opposition leaders, TDP president from Vizag told UNI.

Earlier National Conference leader Dr Farooq Abdullah and Mr Kejriwal had campaigned along with Chandra Babu Naidu at Kadapa and Vijayawada respectively, urging the people to vote for the TDP, seeing the resurgence of coalition politics as an alternative to the present NDA regime at the Centre. The TDP had accused the present dispensation at the Centre of discrimination against Andhra Pradesh.

Soon after the rally, all the three Chief ministers with Naidu working as a mediator in bringing all opposition parties together, are likely to discuss the national scenario and make efforts to further stitch the “Mahagathbandhan”, particularly in the states where the Congress was unrelenting.

Polling will be held for 25 Lok Sabha and 175 Assembly seats on April 11 in the first phase.

In 2014 Lok Sabha elections, the TDP had won 15 seats and YSRCP eight seats while the BJP had remained contended with two seats only.