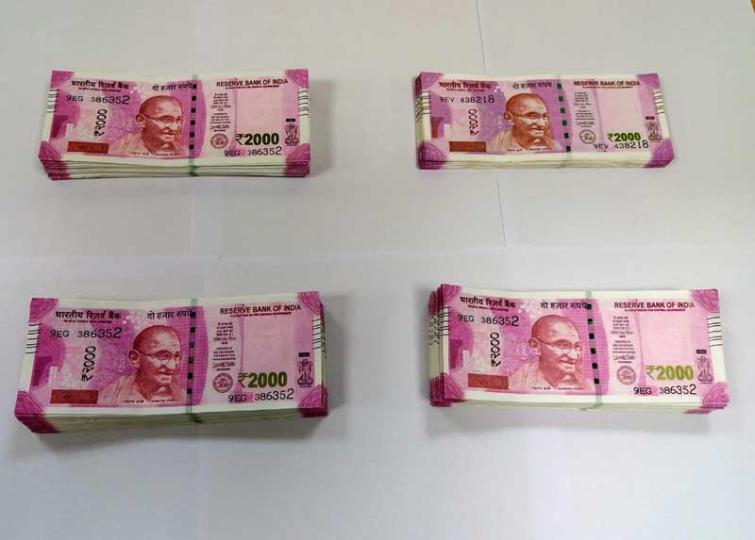 Thane, Mar 30 (UNI) The city police arrested three people including two from Bijnore of UP and seized from them counterfeit notes of Rs 2,000 denomination amounting to Rs 15.76 lakhs in Mumbra, the police said on Saturday.

The ACP Kalwa division Ramesh Dhumal told newsmen on Saturday that police personnel of the Mumbra police station got an information about some people arriving at Kismat colony with counterfeit notes.Acting on the tip-off, the police kept vigil and shortly before midnight spotted a trio with a bag of notes.
The police searched their laptop bag and found 788 notes packed into six packs.All three were arrested on the spot.

The police gave the names of the arrested as Jain Kumar Chunnulal (41),Mohammad Dilshad Sharajuddin(26) both from UP and Javed Ahmed Sharif Ahmed Ansari (30) of Mumbra.


While Jain Kumar worked as a sweeper, Mohammad worked as a compounder at a Ayurvedic clinic, and Javed had a shop in Mumbra.

Preliminary investigations revealed that the the duo from UP procured the notes by paying Rs 3.50 lakhs from a village in Asansol of WB and were to dispose them off to a man from Mumbra but the police nabbed the trio before they could accomplish it.


In light of the present code of conduct for elections the police are examining if there is any linkage with the elections and the notes seized.