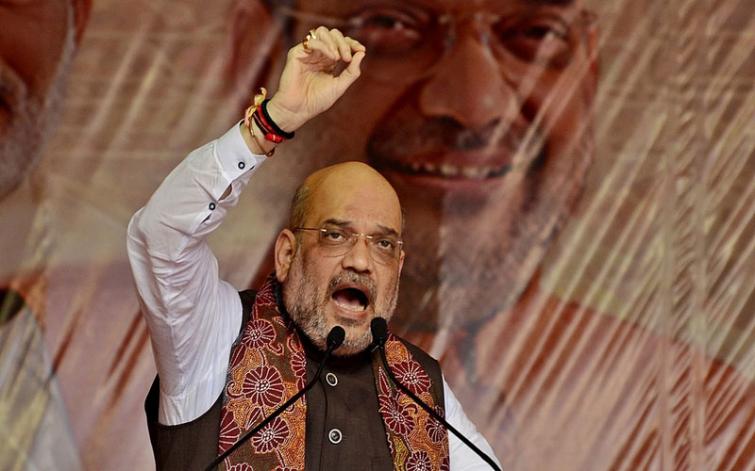 " She doesn't care about eliminating terrorists or national security. All she cares about is her 'intruders' and her vote bank, " Shah pointed out.

Addressing an election rally here, Shah said, "Mamta Didi thinks that she can take support of the 'intruders'. "

" However, I want to remind you that the Narendra Modi government will come and bring the National Register of Citizens and kick out each and every 'intruder, ” he said.

Shah criticized Trinamool supremo and said, “Mamata Didi is spreading lies stating that refugees will be forced to leave India. Let me assure refugees belonging to Sikh, Budhhism and Hindu religions will not be removed and are safe here.”

The BJP president said Prime Minister Narendra Modi has worked so much for the poor – made toilets, pakka houses, provided affordable health services and electricity.

“What has the chief minister of West Bengal done? She should tell people, " Mr Shah asked.

He said, " TMC is bound to lose in the upcoming elections. It has destroyed the culture and heritage of West Bengal. Mamata didi, your time is up. No one will stop people of Bengal from performing pooja during Durga puja. "

The BJP president said, " In the last Panchayat elections, Mamata Didi did not let 37 per cent voters to exercise their right. 80 BJP workers were killed in the state. But this time, I want to tell her to beware. Whatever happens, Trinamool Congress is going to lose this election. "

Shah said, " This is an election for the existence of Bengal. Democracy has been smothered in Bengal. "

“Mamata didi, your time is up. No one will stop people of Bengal from performing puja during Durga puja,” he said.

Shah said, " Gone are the days when TMC and Communists prevented people from voting. BJP karyakartas will ensure that people are able to exercise their right to vote. "

He alleged the Bengal government provides monthly allowance to Imams, but not to the Priests.

"Mamata didi has imposed urdu language in schools. Mamata didi govt allocated Rs 4,000 crore to madarsas. However, the budget of higher education is less than that, " he asserted.