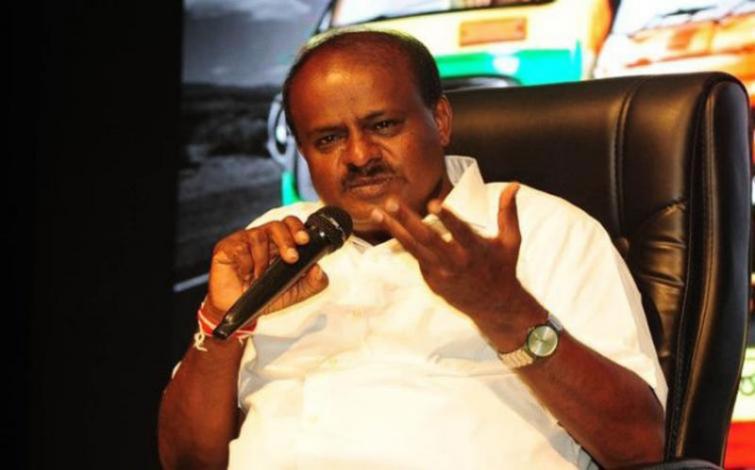 Mysuru, Mar 28 (UNI): Karnataka chief minister H.D. Kumaraswamy today alleged that the NDA government led by the BJP was utilising official machinery including IT department to create fear in the state on the eve of the Lok Sabha polls by conducting IT raids on the JD(S) ministers and other political leaders.

Speaking to reporters here on Thursday, he said: "Prime Minister Narendra Modi's real surgical strike is out in the open through IT dept raids. The constitutional post offer for IT officer Balakrishna helped the Prime Minister in his revenge game. Highly deplorable to use govt machinery, corrupt officials to harass opponents during election time."

He announced that a massive protest in front of IT office, Bengaluru by both JD(S)-Congress party leaders against the officials actions and demanding corrupt officials should be shunted out immediately. Let the country see the protest.

The chief minister said that he would follow what his West Bengal counterpart Mamata Banerjee did to counter the 'misuse' of central agencies.

He said he had hinted yesterday itself about possibility of IT raids on Congress and JD(S) functionaries in the state. He claimed that CRPF personnel were brought from various parts of the country to carry out the raids.

Kumaraswamy questioned the IT utilising the services of CRPF jawans instead of state police during the raids in the name of maintaining secrecy. The Union government and BJP has taken hasty steps and selective IT raids only in Hassan, Mandya, Mysuru and Shivamogga where the JD(S) has strong hold and they wanted to bring fear among the party workers to win the elections.

He said that the IT department even was trying to raid the chief minister's house also, but for that it needs court permission, hence they have not done it. They have collected information on his property also.

"Why no IT raids on the BJP leaders who have amassed wealth illegally during their tenure?" he said.

Kumaraswamy alleged that the IT department officials, who have been working on the behest of the BJP national president Amit Shah and as per his instructions the IT raids have been conducted on the particular persons besides identifying only JD(S) and the Congress party. They did not want to conduct the fair elections in the country knowing well that BJP is going to lose the elections and bring this type of actions will not yield any thing.

JD(S) leader and minister Puttaraju said three teams of income tax officials and CRPF personnel had carried out raids at his Chinnakurli residence in Mandya and his nephew's house in Mysuru. He said he was not afraid of the raids and instead, it had instilled confidence in him.

"I am not deterred by the raids, which are election related. I would like to know which BJP leader's house in Karnataka has been raided," Puttaraju, who is Mandya district's in-charge Minister, said.