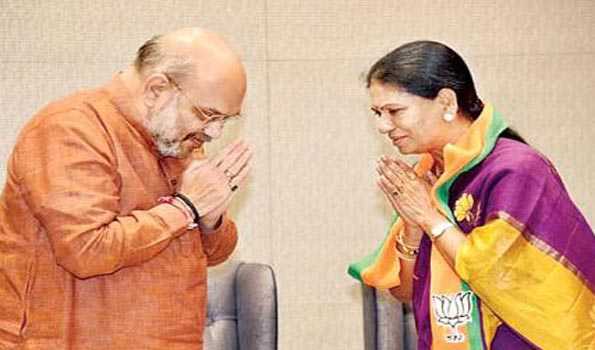 Hyderabad, Mar 20 (UNI) In yet another shock to the Congress in Telangana, senior party leader and former Minister D.K.Aruna has embraced the Bharatiya Janata Party.

She joined the BJP in the presence of Party National President Amit Shah in New Delhi on Tuesday night,.

Aruna had contested from the Gadwal Assembly constituency on a Congress ticket and lost to the ruling TRS nominee in the election held on December 7.

She has been keeping away from the party activities since the Assembly election and sources saod that she was unhappy over a section of the party leaders were allegedly trying to scuttle her growth in the Congress.

In recent weeks, several MLAs including former Home Minister Sabitha Indra Reddy had resigned from the party and some of them announced their intention to join the ruling TRS.

Aruna's departure from the Congress on the eve of the Lok Sabha election has become a hot topic for discussion among political observers.