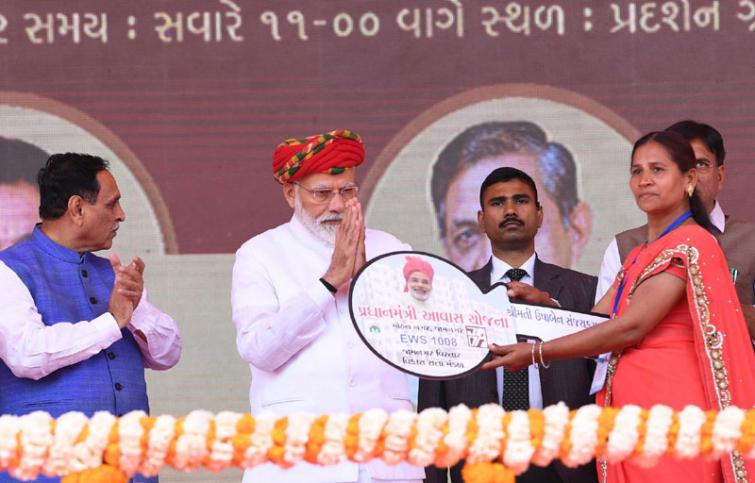 Jamnagar (Gujarat), Mar 4 (UNI/IBNS) For the third consecutive time in three days, Prime Minister Narendra Modi made a veiled attack on opposition parties for questioning the authenticity of February 26 aerial strike while he slammed Congress for twisting his remarks on Rafale advising the party to apply common sense.

"It is natural that we all should believe the armed forces and be proud of the forces. Yet, I don’t understand why some people still want to question the forces," Mr Modi said addressing a rally at Jamnagar in his home state on Monday.

He also maintained that his comments on Rafale have been misconstrued and suggested that opposition Congress and others should apply common sense in understanding what he said about the French aircraft - that India would start getting the supply from September later this year.

“I said if Rafale was acquired in time it would have made a difference (during the February 27 dogfight between Indian Air Force and Pakistanis), but they say Modi is questioning our air force strike,” he said.

"Please use common sense; what I said was if we had Rafale at the time of air strikes and counter fight then none of our fighter jets would have gone down and none of theirs saved,” he said trying to blame the erstwhile Congress-led UPA for delaying and later almost stalling the procurement of Rafale aircraft.

It was during the aerial engagement of February 27 Wing Commander Abhinandan Varthaman’s MiG-21 Bison crashed seconds after he shot down the Pakistani F-16.

In an escalated battle of wits and blame giving between opposition leaders and the government, in last three days, Prime Minister Modi has slammed the political detractors.

Addressing a rally at Patna on Sunday, Mr Modi has asked the opposition parties --"why you want to demoralise our forces. They all want to destroy me but i have given a call to stay united to fight terror and poverty".

On Saturday at a function organised by a media group, Prime Minister has lashed out at opposition parties for raising doubts on the authenticity of the Balakot anti-terror attack.

"You all have started opposing the country in the name of attacking our government and me. Several Modis may come and go but what is important is the country," he has said.

The opposition leaders including the likes of Digvijaya Singh, Kapil Sibal, Mamata Banerjee and Mehbooba Mufti have been questioning the authenticity of the attack and on the quantum of damage it inflicted on the JeM terror group.