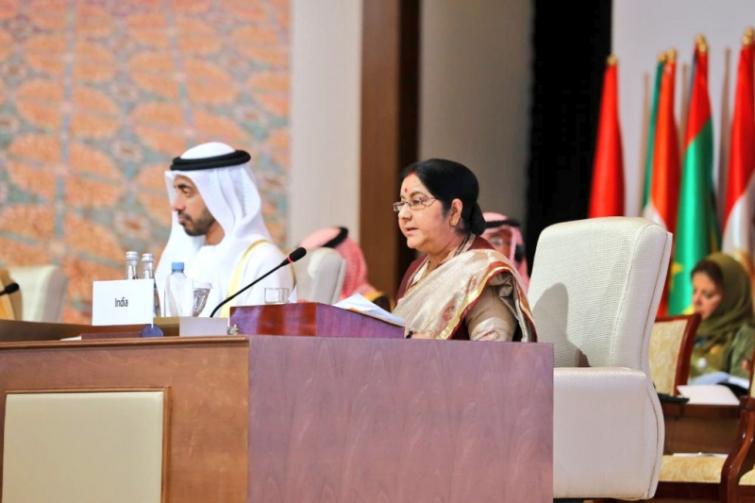 Kashmir is a matter strictly internal to India: MEA on OIC resolution

New Delhi, Mar 3 (IBNS) Responding to a resolution on Kashmir by the Organisation of Islamic States (OIC), India has said that Jammu and Kashmir is a matter strictly internal to India.

"External Affairs Minister Smt. Sushma Swaraj attended the 46th CFM session of the Organisation of Islamic Conference (OIC) at Abu Dhabi on 1 March as the Guest of Honour at the invitation extended by His Highness the Foreign Minister of the United Arab Emirates. We deeply appreciate this historic gesture on the 50th anniversary of their first meeting." the spokesperson said.

The OIC, where Swaraj attended as a guest of honour in what is seen as a diplomatic success of India, in a sharply worded resolution had the phrases that condemn India for human rights violation in Kashmir.

In a resolution adopted by the 46th session of Council of Foreign Ministers (CFM), the OIC member states affirmed that Jammu and Kashmir "remains the core dispute between Pakistan and India and its resolution is indispensable for the dream for peace in South Asia."

While Pakistan stayed away from the OIC this time in protest against the invitation of Sushma Swaraj, the Indian External Affairs Minister  speaking in the backdrop of an India-Pakistan tension over terror attacks and counter strikes,  said the fight against terrorism is not a confrontation against any religion.

Meanwhile, reacting to reports that the OIC meeting expressed concern over alleged human rights violations in Kashmir, the Congress on Sunday said Prime Minister Narendra Modi should answer the Nation on this.

In a post on social media, AICC media in-charge Randeep Surjewala said, 'Modi Govt’s ‘Diplomatic Victory’ turns out to be ‘Diplomatic Faux Pas’! Did PM send our EAM to OIC Meeting for such unacceptable & blasphemous accusations to be hurled at India? PM must answer to the Nation.'