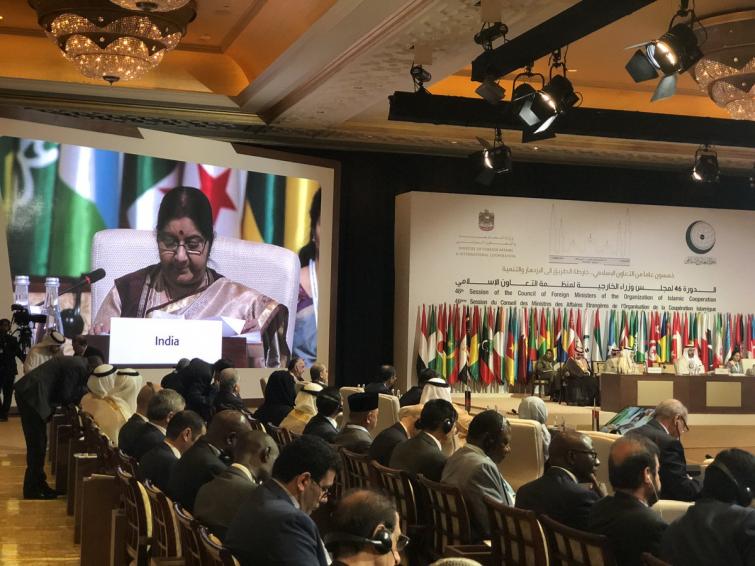 'We will work with you': India to OIC

Abu Dhabi, Mar 1 (UNI) India on Friday sought to build the bridge of understanding with the Islamic world and a world that is infinitely better in terms of equitable economic growth and social justice.

External Affairs Minister Sushma Swaraj told her counterparts from the Organization of Islamic Cooperation (OIC) that the choices they make, the direction they set, will have a profound impact on humanity.

"I am particularly pleased to participate in a conference, whose theme is a road map for prosperity and development," she said.

The 46th session of the OIC’s Council of Foreign Ministers (CFM) is being hosted by the UAE under the title “50 Years of Islamic Cooperation: Road Map for Prosperity and Development."

"The OIC has a huge responsibility and a great opportunity to lift humanity to a higher level of peace and prosperity, and to make this planet a better place, not just for your people, but for rest of the world.

Reminding the OIC members that India is the world’s third largest economy on Purchasing Power Parity; and, is the fastest growing one, Swaraj said, "We are prepared to share our market, resources, opportunities, and skills with our partners.

"We will do what we can within our capacity to ensure that the path to development remains open to all and the global trade regime is open, stable and fair."

Swaraj also told the gathering that India's fight against terrorism is not against any particular religion.
"This is not a clash of civilisations or cultures, but a contest of ideas and ideals. As Prime Minister Narendra Modi has often said, it is a struggle between the values of humanism and the forces of inhumanity."

And in an obvious reference to Pakistan, she said: "If we want to save the humanity then we must tell the states who provide shelter and funding to the terrorists, to dismantle the infrastructure of the terrorist camps and stop providing funding and shelter to the terror organisations, based in their country."
At the same time, she said, the menace could not be fought, only through military, intelligence or diplomatic means.

For this, faiths must speak to faiths, cultures must engage cultures. and communities must build bridges, not erect walls.

The OIC constitutes more than one fourth of the members of the United Nations, and nearly a quarter of the humanity. With many, India has expanding defence and security cooperation, besides robust economies ties.

In the past four years, few relationships have seen as much engagement as India’s relationship with UAE and the entire Gulf and West Asia region.
"We also express our special gratitude to Saudi Arabia, Bangladesh and others friends, for their strong support for hearing India’s voice in this forum," she said.