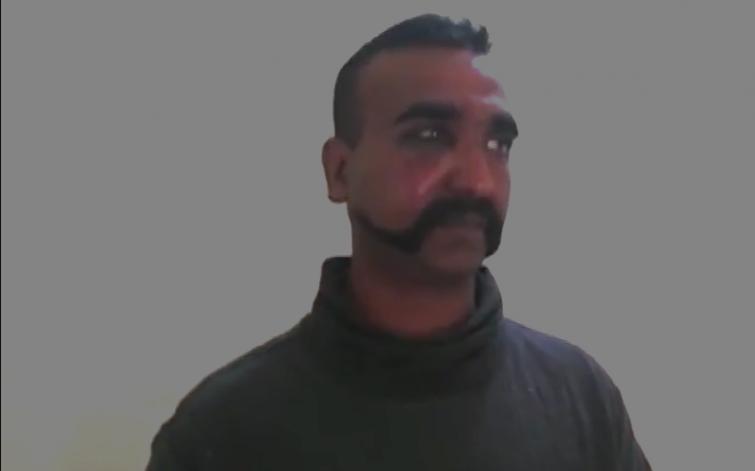 Khan made the announcement while addressing the joint session of Parliament in Islamabad.

Amid escalating tension between India and Pakistan, Abhinandan Varthaman was taken into custody on Wednesday after his MiG-21 jet was downed during an engagement along the Line of Control (LoC).

Khan, who become the Prime Minister of Pakistan last year after his PTI clinched a massive victory in the general elections, said: "As a peace gesture, we will release him tomorrow and send him back to India.”

".....We want to see him back," Indian Air Force have said welcoming the announcement of the release of the captured pilot Wg Cdr Abhinandan from Pakistan custody.

A delegation of Indian Air Force team will on Friday arrive at Wagah border to receive the Wing Commander Abhinandan, whose father too has been a decorated Air Force officer, sources told UNI news agency.

Wg Cdr Abhinandan's MiG 21 was shot after he actually also brought down one Pakistani F-16 fighter on February 27.

"We are happy that our pilot who had fallen across the line of control and was in the custody of Pakistan is being released. We are extremely happy, we want to see him back. Once he reaches back and is handed over to us we will then make any further comment," Air Vice Marshal RGK Kapoor has said.

India on Wednesday and Thursday insisted that there should be immediate and safe return of the pilot.

The Indian government officials had also made it clear that there would be no deal.

The refrain from the Indian side being - New Delhi expects him to return immediately and there is no question of a deal on the matter. Indian position has been crystal clear - pilot Abhinandan has to return unharmed, unconditionally and immediately.

Wing Commander Abhinandan ha brought down a F-16 fighter jet of Pakistan Air Force by firing an R-73 air-to-air missile before his jet was hit.

A day after India carried out aerial strike, Pakistan had launched a retaliatory raid trying to target Indian defence facilities in Jammu and Kashmir.

The Pakistani attempt was, however, foiled.

Meanwhile, reacting to the development, Punjab CM Amarinder Singh tweeted: "Dear @narendramodi ji , I’m touring the border areas of Punjab & I’m presently in Amritsar. Came to know that @pid_gov has decided to release #AbhinandanVartaman from Wagha. It will be a honour for me to go and receive him, as he and his father are alumnus of the NDA as I am."