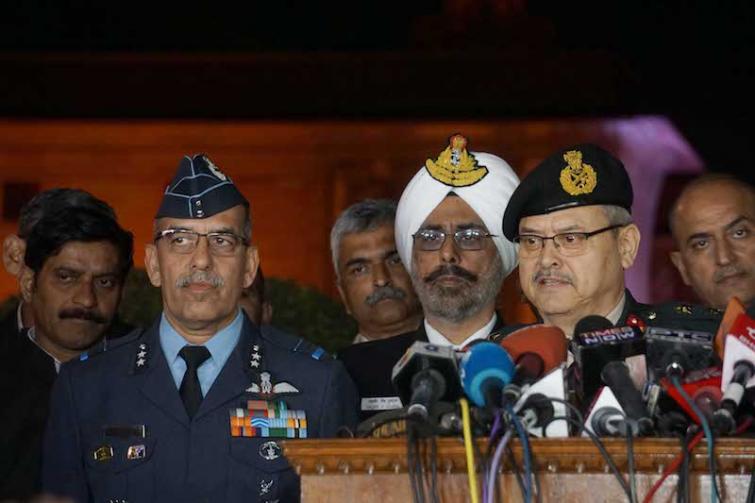 New Delhi, Feb 28 (IBNS): In an attempt to expose Pakistan over the ongoing bilateral tension, the Armed Forces in a joint briefing on Thursday furnished proof of Pakistan's use of F16 jet targeting the Indian military installations though the design was foiled by the Indian side.

The Armed Forces have shown the parts of F16 jet which were used by Pakistan to target Indian Army debunking Pakistan's denial on the use of F16. Notably, Pakistan is not supposed to use F-16 against India as it is an ally of the United States.

"There is enough evidence to show that F-16s were used in this mission through their electronic signatures. Parts of AMRAAM, air to air missile which is carried only on the Pakistani F-16s, was recovered east of Rajouri in the Indian territory. It means they used F-16," said Kapoor pointing out that Pakistan used F-16 jets to target Indian installations.

"We can conclusively say they used F-16," he said.

He said: "Pakistan claimed that they intentionally dropped weapons in open space where there is no human presence or military force. The fact is that they targeted military installation. However, they were intercepted by IAF aircraft which thwarted their plans."

"Although PAF bombs have fallen in Indian army formation compounds, they were intercepted by our system and failed to cause any significant damage to our military installations"

"We have been giving them befitting reply and will continue so," said Bahl. He said Indian surgical strike met the intended targets but it is premature to give any number of casualty at this stage, responding to doubts in section of media if the strikes by India met its target. "We have got the effect we wanted," he said.

"We are fighting terrorism. So long Pakistan continues to support them we are  ready to target their training camps and areas," said one defence official.

Rear Admiral DS Gujral said: "I can assure you of a resolute, swift and strong response by the Navy when needed. We stand as one."

After India refused to negotiate with Pakistan on the issue of safe return of Air Force pilot Wing Commander Abhinandan Varthaman, Pakistan Prime Minister Imran Khan said his country will release the captive on Friday as a "peace gesture".

Indian army officials said they are happy that the pilot who was in the custody is being released. "Once he is handed over we will make any comment. We will see it as a gesture in consonance with Geneva conventions," the IAF official said in today's joint briefing.

A day after the Indian Air Force (IAF)'s surgical strike across the Line of Control (LoC) in Pakistan-occupied Kashmir (PoK), Pakistan claimed that it has shot down two aircrafts of the IAF and captured pilot  Abhinandan.

The neighbouring nation also released a video where the pilot was seen tied to a chair. Later in a video, he was seen lauding the Pakistan Army saying it had kept him safely.

The surgical strike was a response to Feb 14 Pulwama terror attack, in which over 40 Indian paramilitary personnel were martyred. The attack was carried out by Pakistan-based militant organisation, Jaish-e-Mohammed (JeM).

Indian officials said they are happy that the pilot will be returned by Pakistan in accordance with Geneva convention.

Before Khan's announcement, the government on Thursday asserted that there will be no negotiation with Pakistan on the issue of 'safe return' of Abhinandan and New Delhi is also not impressed with Khan's fresh offer to talks.

"There will be absolutely no deal, no negotiations with Pakistan on safety and immediate return of pilot Abhinandan....If they think otherwise, they will not achieve such goals," a source had said here.

The United States, the United Kingdom and France have submitted a fresh proposal at the United Nations Security Council (UNSC) to designate JEM chief Masood Azhar as a global terrorist.

If the resolution is passed, Azhar will not be able to travel to different countries and also his assets will be frozen. He will also be subjected to arms embargo.

While Russia is also expected to support the fresh proposal, all eyes are now on China which had blocked the passage of the resolution in the past.

The United States has urged both the countries to "cease all cross-border military activity" and deescalate the situation immediately.

The US also said Pakistan must abide by the UN Security Council Commitments and should not give the terrorists a safe heaven.