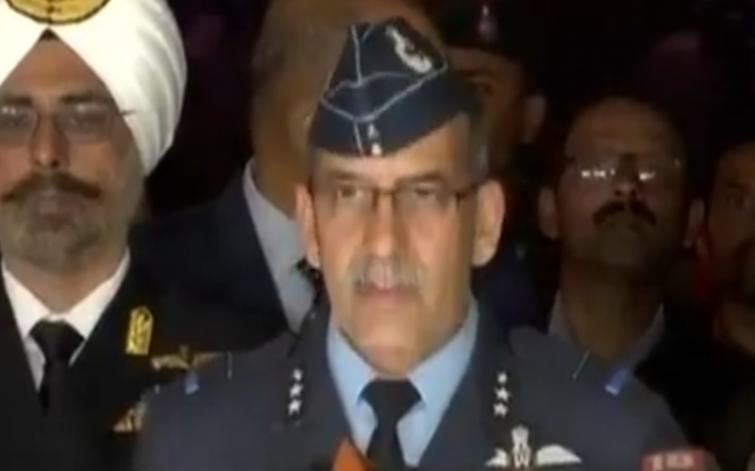 New Delhi, Feb 28 (IBNS): In a joint briefing by the Air Force, Army and Navy, the Armed Forces on Thursday said Pakistan had tried to attack the military installations of India but failed to inflict any damage. Their designs to target our installations by dropping active payloads were thwarted, said the Indian defence top officials outside the Ministry of Defence building.

The Armed Forces held the briefing after Pakistan announced it will release Air Force pilot Wing Commander Abhinandan Varthaman from its captive on Friday.

The IAF had conducted surgical strike on Tuesday as a response to Feb 14 Pulwama attack, which had left over 40 Indian paramilitary personnel martyred.

Air Vice Marshal RGK Kapoor said though Pakistani bombs exploded in Indian military formation, it caused no  damage.  "There is enough evidence to show that F-16s were used in this mission through their electronic signatures. Parts of AMRAAM, air to air missile which is carried only on the Pakistani F-16s was recovered east of Rajouri within the Indian territory," said Kapoor.

"We are fighting terrorism. So long Pakistan continues to support them we are ready to target their training camps and areas," said one defence official.


"We are prepared for any contingency," he said. The officials said Pakistan lied that they shot down two Indian aircraft.


They said the surgical strike caused the damage intended but premature to give any figure.


"We have been  giving them befitting reply and will continue so," said Major general Surendra Singh Behal. Indian officials said they are happy that the pilot will be returned by Pakistan in accordance with Geneva convention.