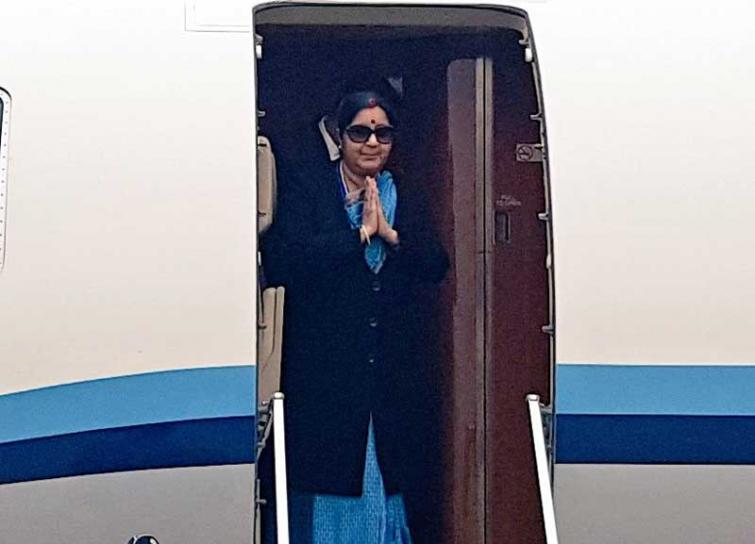 "Continuing our engagement with partner countries EAM @SushmaSwaraj embarks on a three-nation visit that would take her to #Bulgaria, #Morocco and #Spain in the next three days," MEA spokesperson Raveesh Kumar tweeted.

As per a statement issued by the Ministry of External Affairs: "External Affairs Minister will be on an official visit to the Republic of Bulgaria on 16-17 February 2019. The visit is a follow-up visit to the State visit of the President of India to Bulgaria in September last year. This is the first ever visit of an Indian External Affairs Minister to Bulgaria. During the visit, EAM will meet with the Deputy Prime Minister & Foreign Minister of the Republic of Bulgaria. The two leaders will discuss bilateral, regional and global issues of mutual interest. EAM will pay floral tributes at the statue of Mahatma Gandhi at the South Park in Sofia. The statue was unveiled last year by Hon’ble President of India along with President of Bulgaria to mark the celebrations of 150th birth anniversary of Mahatma Gandhi. She will also interact with the Indian community and Friends of India in Sofia during the visit."

The visit is in pursuit of India’s objective of enhanced engagement with the Kingdom and will provide an opportunity to hold in-depth discussions on bilateral, regional and global issues.

During the visit, EAM will interact with her counterpart Nasser Bourita, Minister of Foreign Affairs & International Cooperation, Morocco.

Three MoUs for cooperation in the areas of Counter Terrorism, Housing & Human Settlements and Youth Matters are expected for signing during the visit. EAM will also interact with the Indian community in Rabat.

In the last leg of her visit, EAM will travel to Spain on 18-19 February, 2019 at the invitation of her counterpart, Josep Borrell Fontelles, Spanish Minister of Foreign Affairs, the European Union and Cooperation.

During her visit, External Affairs Minister will hold a bilateral meeting with her counterpart to discuss bilateral, regional and global issues of mutual concern.

The Spanish Government will also confer upon EAM the prestigious Grand Cross of the Order of Civil Merit by the Spanish Government for India´s swift response through Operation Maitri in rescuing 71 Spanish nationals from Nepal in April 2015 in the wake of the disastrous earthquake. EAM will also interact with the Indian Community in Spain.